Pence ripped for not denouncing ex-KKK head: 'If David Duke isn't deplorable who the hell is?' 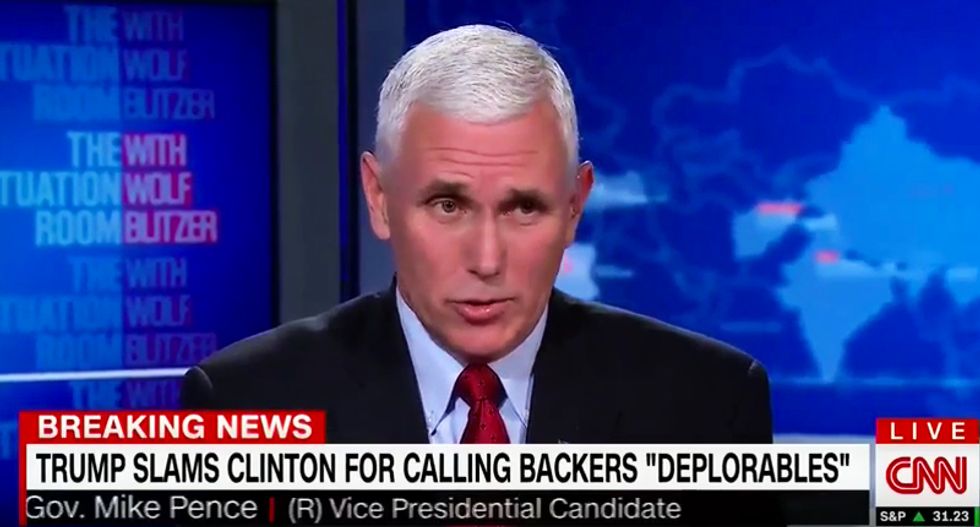 GOP vice presidential  nominee Mike Pence refused to take the bait from CNN host Wolf Blitzer and call former KKK head David Duke one of Hillary Clinton's "deplorables," setting off a firestorm of commenters ripping the Indiana governor for ducking a chance to call out racism.

Hillary Clinton's campaign was first out of the gate tweeting, "If you won’t say the KKK is deplorable, you have no business running the country."

Appearing on the Situation Room, Pence grew agitated when Blitzer brought up the Clinton campaign bringing up the avid support off the white supremacist for Trump.

"I'm not really sure why the media keeps bring up David Duke's name, "Pence began. "Donald Trump has denounced David Duke repeatedly and we don't want his support.  We don't want the support of people who think like him."

"Would you call him a deplorable?" the CNN host pressed.

“No, I’m not in the name-calling business, Wolf. You know me better than that,” the former Indiana governor replied. " What Hillary Clinton did the Friday night was shocking."

If you won’t say the KKK is deplorable, you have no business running the country. https://t.co/mFut8Qrz9A
— Hillary Clinton (@Hillary Clinton)1473718174.0

3. Trump is Trump. But Pence going along with this is significant. The GOP is becoming Trumpized before our very eyes.
— Jeet Heer (@Jeet Heer)1473718937.0

BLITZER: Would you call David Duke "deplorable?" PENCE: I'm not in the name-calling business. If I was, I'd probably just call him "Dave"
— Owen Ellickson (@Owen Ellickson)1473716748.0

Pence and Trump REFUSING to denounce the KKK shows what this election truly is: a battle for US values--diversity or white nationalism.
— Marcus H. Johnson (@Marcus H. Johnson)1473719667.0

I was just talking about this on @CNNSotu. David Duke is deplorable. You can have him Gov. Pence. https://t.co/xZkkBkRGff
— Bakari Sellers (@Bakari Sellers)1473715907.0