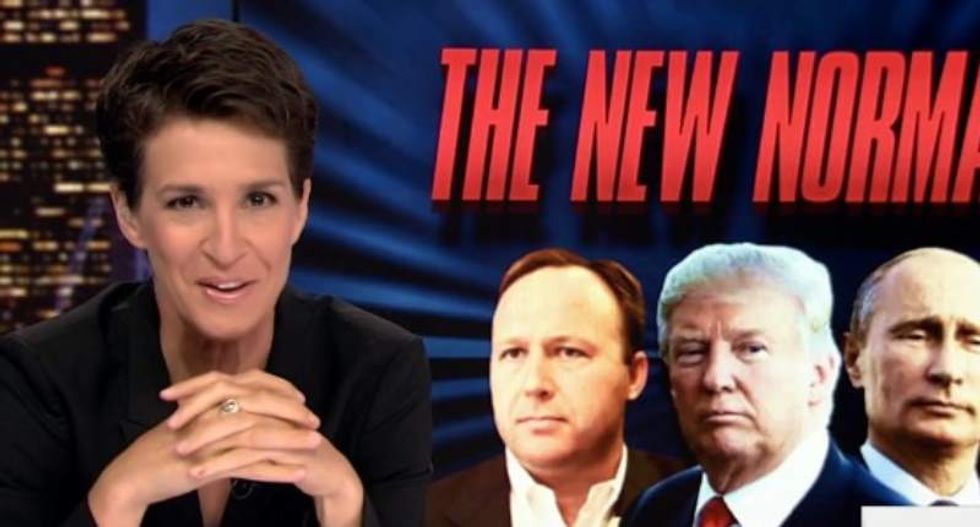 MSNBC's Rachel Maddow put to rest on Thursday Donald Trump's idea that Russian President Vladimir Putin called him "brilliant." And she was upset that she even had to.

"This is an election year where the Republican Party is running as their candidate for president a candidate who is so self-centered and narcissistic that a flippant -- and apparently misquoted -- compliment from another foreign leader was enough to put enough stars in his eyes that the Republican Party's presidential nominee now really does say that he prefers the president of Russia to the president of the United States," she fumed. "This is crazy. And it's irrelevant. But this is the highest level of our politics right now."

A night earlier, Maddow's colleague Matt Lauer presented as fact that Putin called Trump "a brilliant leader" during their interview at the "Commander-in-Chief forum" aired on the network.

"Well, I think when he calls me brilliant, I'll take the compliment, OK?" Trump responded.

But Maddow played footage of Putin himself correcting CNN's Fareed Zakaria earlier this year regarding the matter, telling him, "I only said that he is a bright person. Isn't he bright?"

However, even that description was lost in translation. Maddow explained that had Putin meant to call Trump "brilliant" because of his intellect, he would have used the word "blestiashchlii." Instead, he used the adjective "yarkii," which is closer to calling him brightly-colored or flamboyant.

"And you know what? It really shouldn't matter," she said. "On the one hand, who cares? On the other hand, we now have to. Because this is an election where the Republican presidential campaign at the number-one online 'debunker' of 9/11 and the Oklahoma City bombing and the Challenger disaster, and the Aurora movie theater massacre, and the Sandy Hook shootings, and the Boston bombings because 'all of those things didn't really happen -- they're all government conspiracy theories.'"