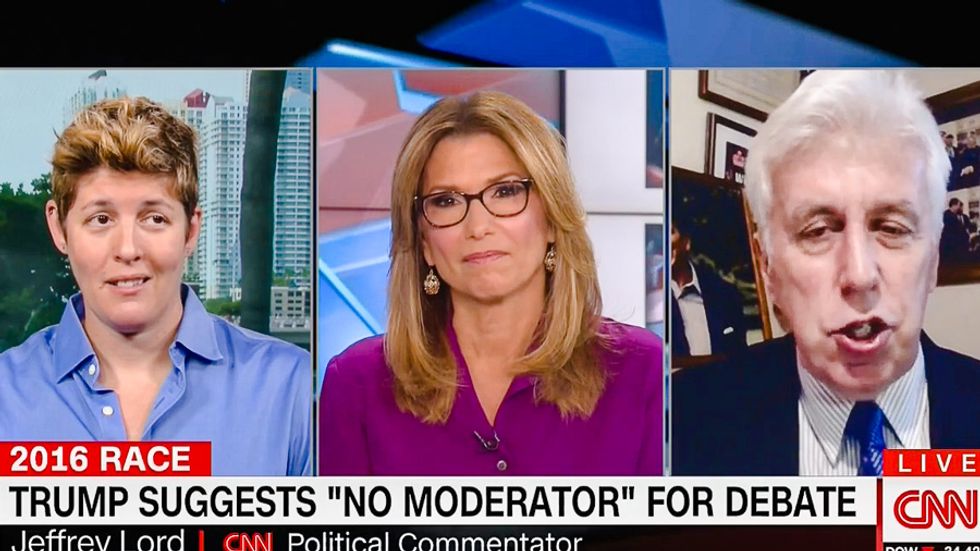 Trump-backing CNN contributor Jeffrey Lord on Monday doubled down on his candidate's call to ban moderators and fact checking from upcoming debates.

Speaking to CNBC on Monday, Donald Trump argued that having a debate without a moderator would prevent a "very unfair" outcome.

"What they’re doing is they’re gaming the system so that when I go into the debate, I’m gonna get — be treated very, very unfairly by the moderators," Trump insisted. "I think, maybe, we should have no moderator. Let Hillary and I sit there and just debate because I think the system is being rigged so it’s gonna be a very unfair debate, and I can see it happening right now."

Lord on Monday pointed to the 1858 debates between Abraham Lincoln and Stephen Douglas as a model for the events.

"I think it was [Fox News host] Chris Wallace -- he's one of the moderators -- who said he's not going to sit there and be a fact checker," Lord said. "I think that's up to the American people."

"You know, some of these fact checking -- quote, unquote -- sites are basically liberal," he continued. "And they have a bias going into it. So, I really don't count them much as fact checkers."

CNN contributor Sally Kohn countered that the public deserved "some semblance of objectivity."

"The American people have the right to know the facts when it comes to both candidates," she remarked. "I can't even believe we are debating this."

Lord pushed back, asserting that news shows would fact check the candidates after the debate concluded.

"That's just the nature of the beast, that's part of American democracy," he said. "And I think we should all just relax and, chill out and let it happen and go on from there."

"I think [Trump] has a great suggestion about this," Lord added. "That would be a fascinating thing to see he and Hillary Clinton sit there and the only person else on stage is a time keeper."

"If could be fascinating or it could be like a really bad Thanksgiving dinner," CNN host Carol Costello concluded.