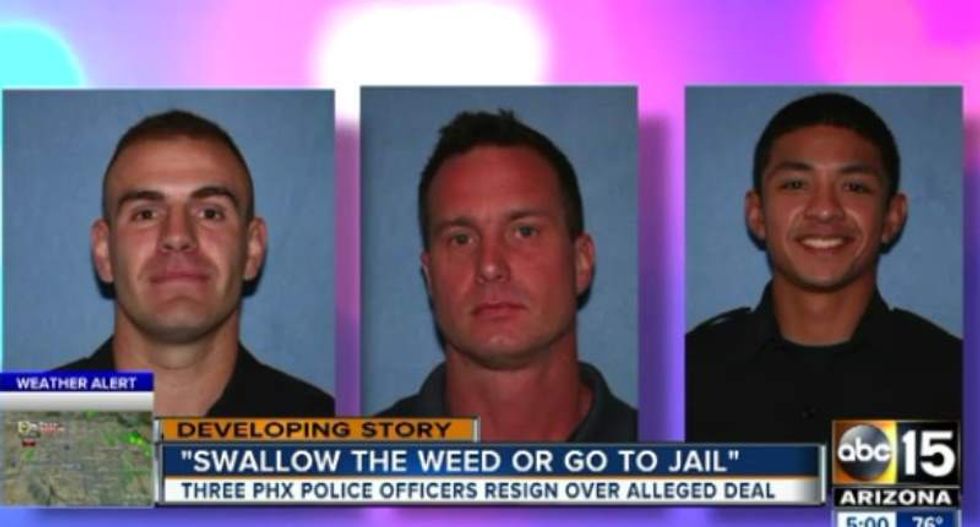 Three Phoenix policemen resigned on Thursday after two of them forced a 19-year-old motorist to eat marijuana found during a traffic stop, the city’s police chief said.

The officers' supervisor, a police lieutenant with 20 years on the job, has been demoted in connection with the incident, which took place during a Sept. 13 predawn traffic stop, Phoenix Police Chief Joseph Yahner said.

“The allegations against these former officers are compelling, appalling and extremely unprofessional,” Yahner told a news conference at police headquarters. “Appropriate action has been taken.”

He said he had planned to fire the three officers, but that they resigned instead.

The department identified the police officers involved as Richard Pina, Jason McFadden and Michael Carnicle. All had been on the job for less than a year, although McFadden had about 10 years' experience with the Chicago Police Department. The demoted supervisor was identified as Jeff Farrior.

Police are investigating the incident, and Pina and McFadden could face criminal charges, said police spokesman Sergeant Jonathan Howard. Carnicle was at the scene but did not participate in the incident, Howard said.

The police union could not immediately be reached for comment. It was not clear if any of the officers had lawyers.

Police said officers pulled over the motorist, who was not identified, for speeding in a 2002 BMW at about 3:30 a.m. and later discovered the drug in his car.

Faced with the officers' demand that he eat the gram of marijuana, the teenager popped it in his mouth and was subsequently issued a traffic ticket, police said. He reported feeling briefly ill from the drug.

The teenager filed his complaint the same day as the traffic stop.

Yahner said there was no video from the officers of the stop and that it appeared they turned off their body cameras prior to the incident.

“This conduct is contrary to everything we stand for … and it undermines the good actions of the men and women of the Phoenix police department,” Yahner told reporters.

Farrior was disciplined for not taking immediate action after learning of the incident, police said.

Marijuana is banned under federal law, but Arizona voters approved a ballot measure in 2010 to allow the drug for medical purposes. In November, the state's voters will decide on a proposal to legalize recreational use.