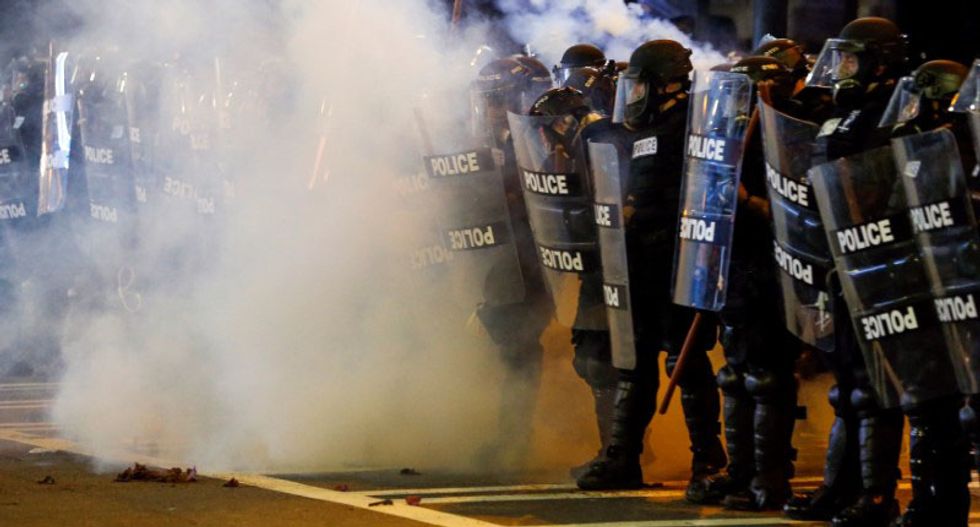 Police hold their lines in uptown Charlotte, NC during a protest of the police shooting of Keith Scott, in Charlotte, North Carolina, U.S. September 21, 2016. REUTERS/Jason Miczek

Residents of Charlotte, North Carolina, woke to a state of emergency on Thursday with National Guard troops deployed on the streets after a second night of violent protests over the fatal police shooting of a black man.

One person was on life support after being shot by a civilian late Wednesday as riot police used tear gas, rubber bullets and flash-bang grenades to try to disperse demonstrators who looted stores and threw rocks, bottles and fireworks.

The latest trouble erupted after a peaceful rally earlier in the evening by protesters who reject the official account of how Keith Scott, 43, was gunned down by a black police officer in the parking lot of an apartment complex on Tuesday afternoon.

Authorities say Scott was wielding a handgun and was shot after refusing commands to drop it. His family and a witness say he was holding a book, not a firearm, when he was killed.

Scott's wife, Rakeyia Scott, said on Wednesday evening that her family was "devastated" and had "more questions than answers" about her husband's death.

She said she respected the rights of those who wanted to demonstrate, but asked they do so peacefully.

Looters were seen smashing windows and grabbed items from a convenience store as well as a shop that sells athletic wear for the National Basketball Association's Charlotte Hornets. Protesters also set fire to trash cans.

It was the second night of unrest in North Carolina's largest city and one of the biggest U.S. financial centers. Sixteen police officers and several protesters were injured on Tuesday night and in the early hours of Wednesday.

Governor Pat McCrory declared a state of emergency late Wednesday night and began the process of deploying the National Guard and state highway patrol officers to the city to help restore peace.

"Any violence directed toward our citizens or police officers or destruction of property should not be tolerated," McCrory said in a statement late on Wednesday.

Charlotte Mayor Jennifer Roberts was considering a curfew and Bank of America Corp , which is headquartered in Charlotte, told employees not to report to work at its uptown offices, local media reported.

The killing of Scott came just days after a fatal shooting of an unarmed black man in Tulsa, Oklahoma that was recorded on video. Protesters have held peaceful rallies demanding the arrest of the female officer involved.

U.S. President Barack Obama spoke by telephone on Wednesday with the mayors of Charlotte and Tulsa, a White House official said.

The two deaths were the latest in a series of police shootings over the last couple of years that have raised questions about racial bias in U.S. law enforcement. They have also made policing and community relations a major topic ahead of the presidential election in November.

The American Civil Liberties Union has called on the police in Charlotte to release camera footage of the incident. Authorities have said the officer who shot Scott, Brentley Vinson, was in plainclothes and not wearing a body camera. But according to officials, video was recorded by other officers at the scene, and by cameras mounted on patrol cars.

Mayor Roberts said she planned to view the footage on Thursday, but did not indicate if or when it would be made public.

William Barber, president of North Carolina's chapter of the NAACP, called for the "full release of all facts available," and said NAACP officials planned to meet with city officials and members of Scott's family on Thursday.


Ty Garbin of Hartland Township, and Kaleb Franks of Waterford, said the defendants were fully onboard with the plan and eager to implement it. Garbin and Franks, who are considered vital for the government’s case, pleaded guilty following their arrest and agreed to testify for the prosecution.