Stephen Colbert: 'Pam Bondi is the only person in the world who made money from Trump University' 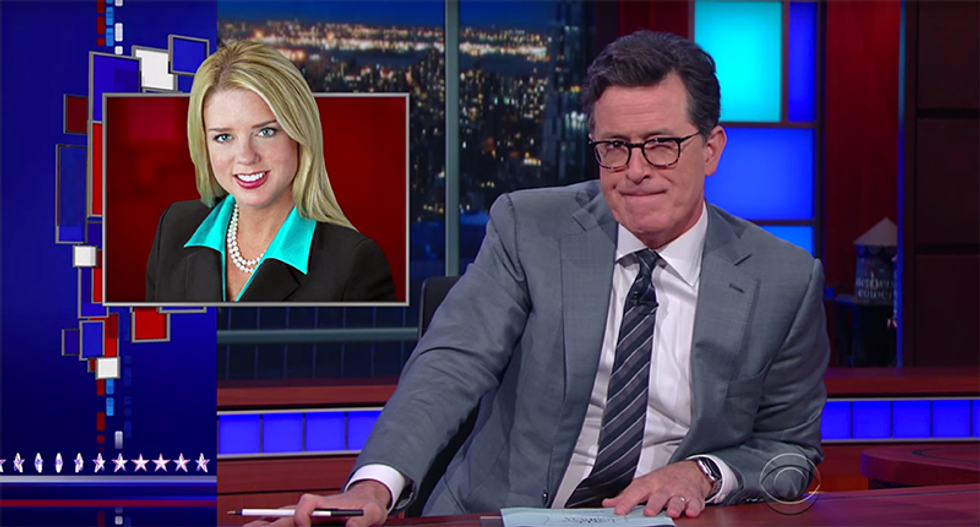 When Republican presidential candidate Donald Trump gave Attorney General Pam Bondi $25,000 just four days before Florida's investigation into Trump University was dropped, he said there was nothing to it.

When Bondi got a sweet deal on a fundraiser at Trump's Mar-a-Lago resort, she said he was just a typical supporter.

But something in this Trump/Bondi scandal doesn't quite pass Stephen Colbert's smell test.

"One thing's for sure: Pam Bondi is the only person in the world who made money from Trump University," Colbert said on Thursday night's "Late Show."

Colbert said he didn't know much about Bondi, so he Googled around looking for information about her ethics and found an article from the Tampa Bay Times, "Pam Bondi Stole My Dog."

The story explains that after hurricane Katrina the Humane Society rescued hundreds of dogs and Bondi adopted one of them. However, that dog actually belonged to someone who was looking for him. A year later, when they tracked him to the Tampa Bay area, Bondi refused to give him back to his family. Bondi fought against a Katrina-ravaged family for 16 months because she wouldn't give them back their dog. Even more heartbreaking, Bondi changed the name of the dog to "Noah" from "Master Tank."

"That dog had the greatest name in the world and you changed it?" Colbert said flabbergasted. "Seriously, what sounds better? 'Time for dinner, Noah.' Or 'The meat feast is arrayed before you, Master Tank.'"

In all seriousness, "refusing to give back a dog to flood victims, but naming the dog after the most famous flood victim of all time is just cold," Colbert said. "Hi! I'm Pam, this is my daughter Kidnapped."

The good news is that Bondi did ultimately give the dog back to the family.

Colbert argued that this is remarkably similar to Donald Trump's deal with Bondi. "He said, 'Yeah I cut the check, but it's only because I like Bondi so much. I'm not the kind of guy who expects favors in exchange for political donations.' Which makes me wonder, then who is this guy?" Colbert asked before showing the clip of Trump saying he gives political donations so politicians will do what he wants and "kiss my ass."

Colbert was more disturbed by the idea of the texture of Trump's ass, which he discerned was either like cold pizza or bumpy gourd.