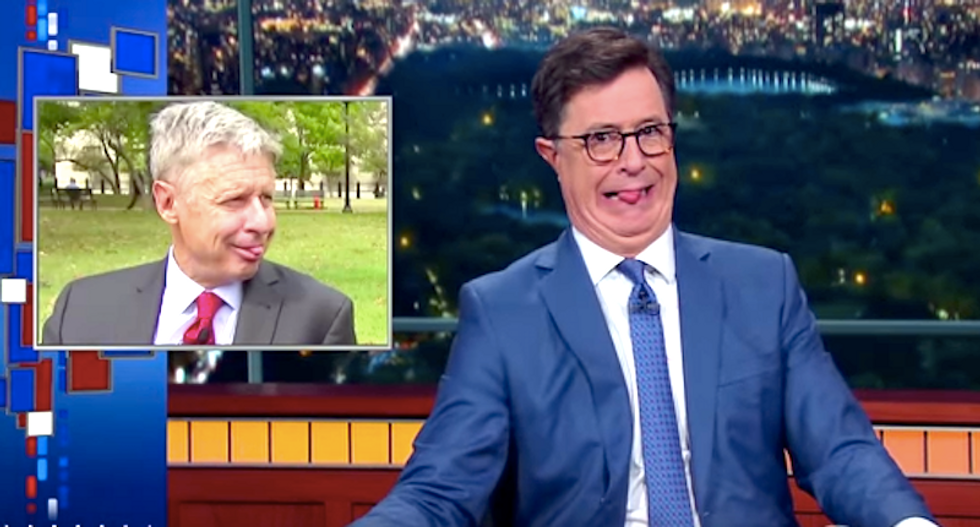 Colbert alleged that the only thing most millennial voters care about is that Johnson wants to legalize marijuana. Libertarians have been waiting for a smart candidate to help build their brand, but Colbert noted that they'll have to keep on waiting.

In an interview with MSNBC about Monday's presidential debates, Johnson claimed that he could pull ahead of Trump and Clinton if he was to appear on the debate stage. "And it wouldn't have anything to do with my debate performance either," Johnson said. "It would just be that people would recognize that there was another choice." He continued with his tongue sticking out saying he could sit there biting it and not saying anything and succeed.

"I think that park bench is where Gary Johnson lives," Colbert joked. "And it doesn't get much better when you can understand him."

Colbert brought up Johnson's position on climate change. At a press conference, Johnson said that we really shouldn't worry about it because ultimately the sun will swell and destroy the earth anyway.

"That's the same excuse I use around the house," Colbert said. "Sorry, honey, I would take out the trash but in a couple of billion years, the sun is going to destroy the earth, so... so what's the point?"

When pressured to give a better answer on global warming, Johnson said, "we do have to inhabit other planets."

Then there was the Aleppo incident. When Johnson asked his now-famous "and what is Aleppo" line, Mike Barnicle followed up with "you're kidding."

"Yes, obviously he's just kidding," Colbert said. "It's a joke: Knock, knock. Who's there? 400,000 refugees. No wonder Johnson is polling at 37 percent among military service members, because if the president doesn't know about Syria, there's no way he's sending you there."

Just last night, Johnson had another major flub when he couldn't name a single world leader that he looked up to. He admitted to having "an Aleppo moment."

"Yes, that is an Aleppo moment, because bombing that bad should be a war crime," Colbert said.

"Obviously, Gary Johnson's ignorance, crazy ideas and strange tongue exercises make him the most laughable candidate out there. Or it should," he closed before a photo of Donald Trump flashed on the screen.