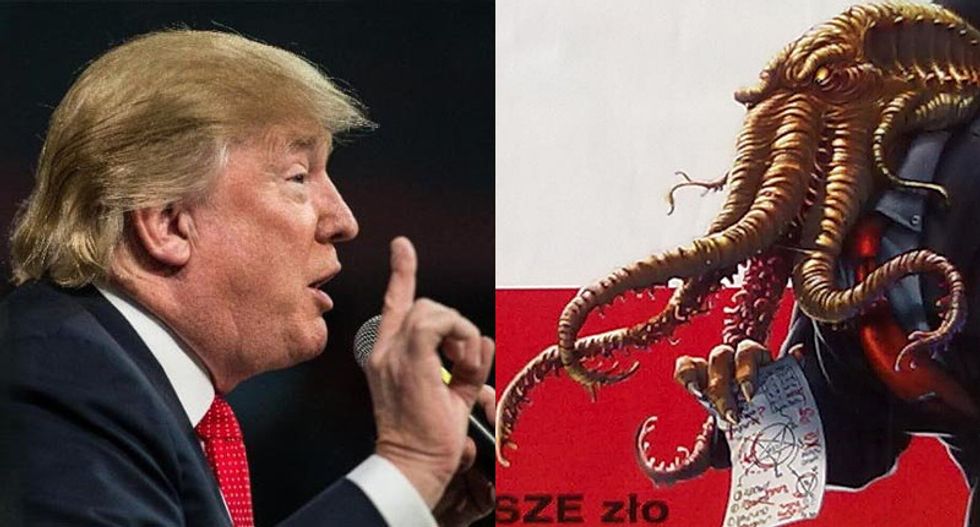 The online run-in was prompted by King joking on Twitter that per "reliable sources," the GOP presidential nominee was actually the Great Old One in disguise.

"The absurd hairdo isn't absurd at all," King said. "It hides the tentacles."

The tweet can be seen in its entirety below.

King's quip summoned a response from the parody account @cthulhu4america, which scolded King saying, "Trump could barely hope to be 1/63 as great as I am if he weren't such a buffoon."

The response was attached to a statement saying in part, "You will not find me giving pneumonia to small children or being an impulsive firestarter. Those are the lesser evils to which I should never be compared. It is the end of watch for mankind and it is our aim to bury them in the dead zone."

The statement can be seen in its entirety below:

The "campaign" is also hawking T-shirts and posting its own ads, as seen here:

Kidnappers in Haiti demand $17 million ransom for US missionaries

Kidnappers holding a group of 17 US and Canadian missionaries in Haiti including five children are demanding a ransom of $1 million for each of their hostages, security sources said Tuesday.

The kidnapping by one of Haiti's brazen criminal gangs has underlined the country's deepening woes following the assassination of president Jovenel Moise in July, with lawlessness mounting in the Western hemisphere's poorest nation.