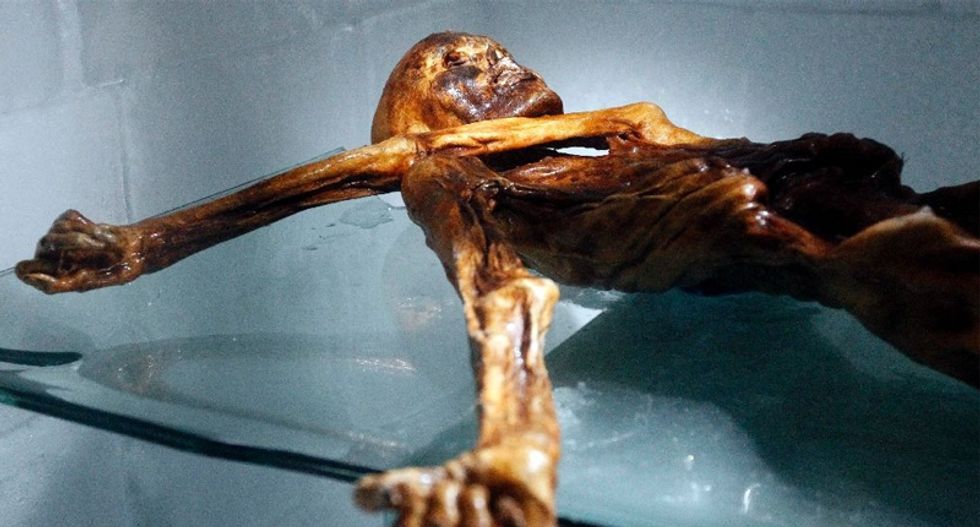 Mummified in the ice, "Oetzi", as he was later nicknamed, was a sensation, providing invaluable scientific insights that 25 years later show no sign of abating (AFP Photo/Andrea Solero)

When police heard about the frozen corpse up in the Alps in September 1991, they opened a criminal probe. Murder it was, but the crime was rather old -- and the ultimate cold case.

The dead man, found by hikers 25 years ago this week a snowball's throw from the Austrian-Italian border and put in a wooden coffin at a nearby police station, turned out to have died more than 5,000 years ago.

Mummified in the ice, "Oetzi", as he was later nicknamed, was a sensation, providing invaluable scientific insights that a quarter of a century later show no sign of abating.

"The iceman is without doubt one of the most outstanding mummy discoveries in the history of mankind," said Angelika Fleckinger, director of the museum in Bolzano, Italy, where the mummy is on display.

"It's a unique window into the prehistoric era, and gives us an incredible amount of information," she told AFP.

To put it into perspective, when Oetzi died around 3,350-3,100 BC, Stonehenge in England and the first Egyptian pyramids were still hundreds of years from being built.

He lived during the Late Neolithic or Copper Age when mineral extraction and copper smelting, which spread to Europe from the Near East, was fundamentally transforming human society.

Perhaps the resulting upheaval explains his still mysterious death. That he came to a sticky end was confirmed by the arrowhead lodged in his shoulder, only found in 2001, showing he had been shot from behind.

He would have bled to death in minutes and was possibly finished off with a whack on the head. He had at least had a large meal including barbecued ibex around 12 hours earlier, the contents of his stomach showed.

And his untimely demise high in the mountains meant for scientists that he was incredibly well-preserved, allowing detailed studies.

Unlike other ancient mummies, Oetzi is "damp", meaning there is still humidity in his cells and his body is untouched by funeral rites. Egyptian specimens are generally without brains and other organs.

The findings include that Oetzi was lactose intolerant and genetically predisposition to heart disease, as shown by his hardened arteries, something thought of before as a modern phenomenon.

The 30 types of pollen in his intestines and the isotopic composition of his tooth enamel suggest he lived just south of the Alps.

He was from a genetic subgroup now extremely rare in Europe but relatively common in Corsica and Sardinia, meaning that people there and Oetzi have common ancestors.

Albert Zink, director at the EURAC Institute for Mummies and the Iceman in Bolzano, said that studying the bacteria in his stomach could help advances in modern medicine.

For instance Oetzi's intestine contains H. pylori, a bacteria present in 50 percent of humans' guts today and which can lead to stomach ulcers or even cancer.

"Maybe this was a positive bacteria that helped with the digestion of raw meat and later turned into a pathogen," Zink told AFP. "Clinicians are very interested (in our research)."

Oetzi was around 46 when he died, a good age for his time. And with not an ounce of excess fat, he must have been fit. He had brown eyes, a beard, long hair -- and 61 tattoos.

But these were not ornamental but medicinal. They were where there were signs of wear, and correspond to pressure points used in acupuncture today.

Before Oetzi was discovered, it was thought this technique originated 2,000 years later in Asia.

What he did have though was an axe with a copper blade, which would have been a coveted object -- the iPhone 7 of his day -- as well as a wealth of other equipment.

This included a quiver of arrows, a dagger, two types of tree fungus, one probably for lighting fires and another medicinal, and a pencil-like tool for sharpening arrows.

His clothing is also well preserved, including leggings and a coat made from goat hide, a hat of bear fur, shoes of tree bast netting, hay and deer skin, and even a backpack and possible cape.

All this, plus Oetzi himself inside a special air-conditioned container, can be seen in the South Tyrol Museum of Archaeology, which attracts 260,000 visitors a year from the world over and where queues are often long.

"We could say that Oetzi has put Bolzano/Bozen on the map," said Roberta Agosti from the Bolzano tourism office. In fact a new, bigger museum is planned.

And 25 years after his discovery, scientists continue to learn more things about Oetzi, helped by the advent of new technologies.

Indeed on Monday a major mummy congress begins in Bolzano revealing new findings including on the bacteria in Oetzi's stomach and the circumstances surrounding his death.

And one upside to global warming is that more treasures may be discovered, like the snowshoe found nearby that was recently revealed to be 500 years older even than Oetzi.

Andy Biggs is CPAC’s 'piñata' — until he vows investigation into J6 committee: report

GOP Rep. Andy Biggs of Arizona was booed at the CPAC summit in Texas on Friday for not doing more to release Jan. 6 Capitol attackers from jail.

Biggs was on a panel titled the “Rise of the American Gulag” at the Dallas conference.

He announced the appointment during a news conference Friday in West Palm Beach as Francis stood beside him accompanied by her mother, husband, and two small children. Francis would be the only Black person appointed to the court under DeSantis and the second Black woman to serve.