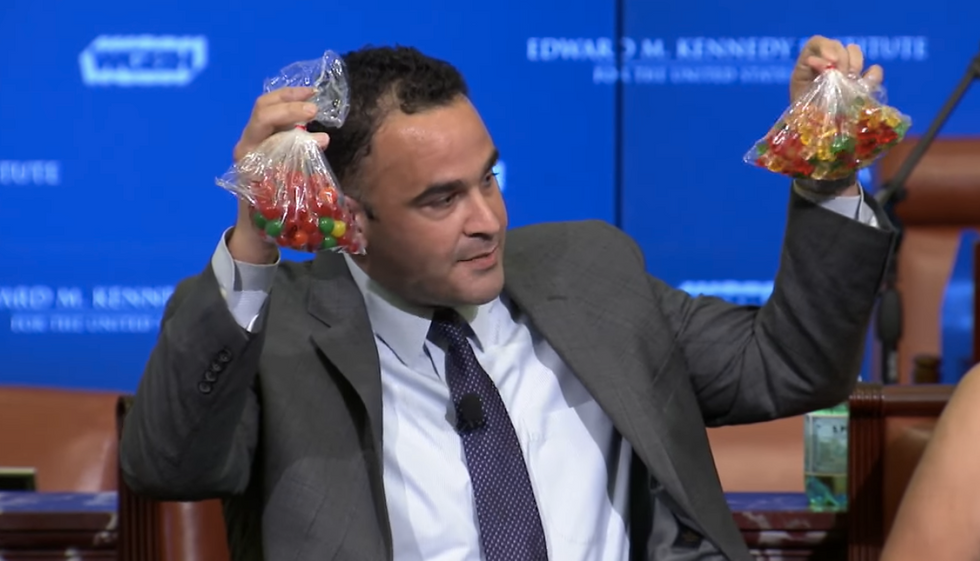 A prominent anti-marijuana legalization activist not only violated Massachusetts law by bringing THC-infused candy to a seminar about pot legalization, he then lost the drugs when someone pocketed his stash.

"Someone stole the edibles," exclaimed marijuana prohibitionist Dr. Kevin Sabet, according to Marijuana.com. Sabet was prepared to leave after Wednesday's televised forum about a Massachusetts ballot measure that would make marijuana available for recreational use and subject it to the same sort of regulations in the state as alcohol.

Sabet -- director of the Drug Policy Institute at the University of Florida and who represents the prohibition group Smart Approaches to Marijuana -- was using the candy as a prop to bolster his argument that the availability of candy and food products with marijuana poses a threat to the safety of children.

The forum was broadcast live by Boston's WGBH-TV. During his arguments, Sabet held up two bags of brightly colored candy. One, he said, was regular candy. The other was an ounce of candy infused with psychoactive compounds from the marijuana plant.

"At the end of the day," Sabet said, "I think parents should ask themselves whether they can tell which bag of candy here is marijuana and which one isn't."

After the seminar, Sabet was collecting his things and found that both bags of candy were missing.

Boston's Fox 25 News posted video from the Kennedy Institute forum's security cameras that showed a man picking up the bags and dropping them into a woman's carry-all.

That culprit turned the candy over to Dr. Keith Saunders of the Boston Pot Report.

Saunders told Marijuana.com that he took the candy to a Massachusetts laboratory for testing.

"If he was telling the truth, one of those bags contains over an ounce of THC-laden product, which is above the decriminalization limit in Massachusetts," Saunders said.

If the candy comes back positive for THC, Saunders said, "I’m not going to hold them as evidence against him, as I don’t think he should be arrested for marijuana possession, but I do think he’s a stupid ass for doing it."

Watch vide of the seminar, embedded below: