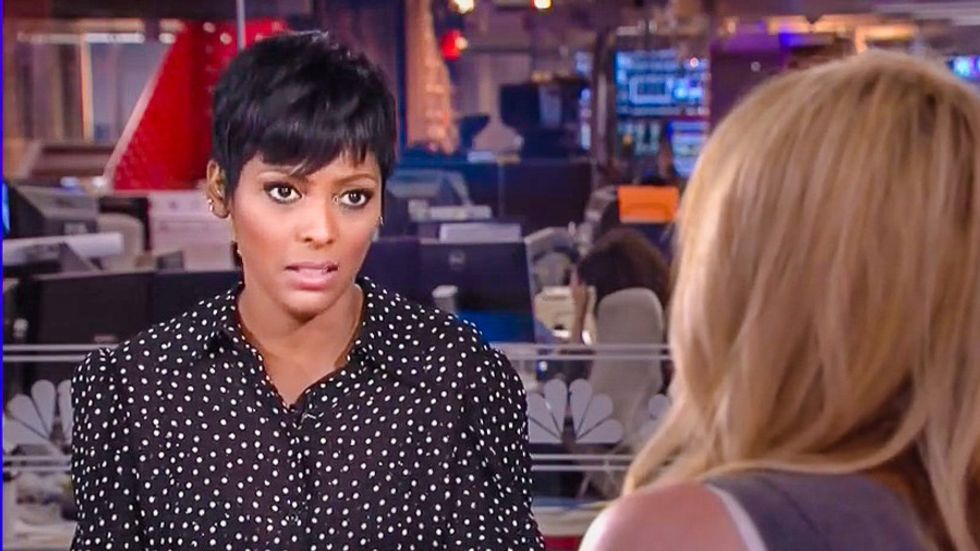 After Trump received a letter of endorsement from 88 retired military figures, Hall pointed out to Delgado that it was impossible to verify that Trump had donated to veterans charities because he refused to release his tax returns.

Delgado asserted that Trump "can't release" his taxes because he is under IRS audit.

"Yes, you can," Tall said. "There's nothing that prevents you."

Hall noted that Trump promised in 2014 that he would release his tax returns if he ran for president even though he was being audited at the time.

"Why is it you want them released?" Delgado quipped. "I think the bigger issue is Hillary Clinton's medical records."

"We don't know where he's invested his money," Hall remarked, getting the interview back on track. "There was a New York Times report about ties to Chinese banks, potential investments in Russia. We need to know more about this presidential candidate. Why not release that information?"

Hall moved on to questions about Trump's illegal donation to Florida Attorney General Pam Bondi after she dropped a lawsuit against Trump University.

"It sounds like a situation of pay-for-play," Hall observed.

"Pam Bondi asked for that donation before she even knew that some complaints had come into her office, hundreds of complaints," Delgado insisted.

"He would say that there's no way Hillary Clinton had this conversation and that this lawsuit did not come up," Hall countered. "Remember all the suspicions regarding [Attorney General Loretta Lynch] and Bill Clinton on the plane? Donald Trump would not accept that as answer."

Delgado insisted that the donations to Bondi were "not suspicious" because Trump was a "friend."

The Trump surrogate then attempted to pivot to "pay-for-play" at the Clinton Foundation, but Hall wasn't having it.

Watch the full interview below from MSNBC, broadcast Sept. 6, 2016.