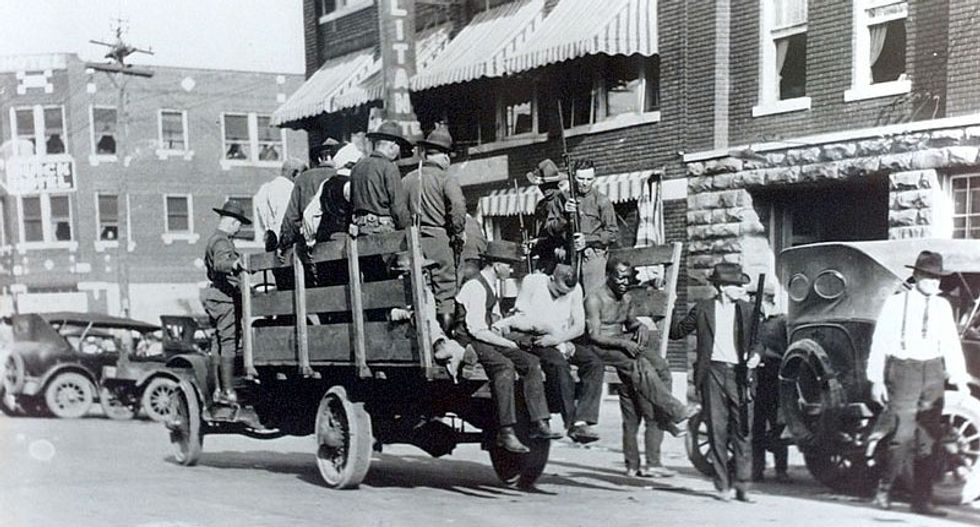 Terence Crutcher was not armed when he was  shot to death by Officer Betty Jo Shelby of the Tulsa Police Department on Friday. The video of Crutcher's seeming execution was captured by dashboard cameras.

In April of 2015, Eric Harris was shot to death by a Tulsa County Reserve Sheriff's Deputy.

Unlike many agencies that refuse to keep track of the number of officer-involved shootings, the Tulsa World has compiled statistics on those for its area, which show that between 2007 and 2016, Tulsa police and sheriff's deputies were involved in 24 shooting deaths. All the killings up through 2015 were ruled "justified" (2016 cases are still pending) although in several cases, the people who were shot were unarmed. In one case, an 18-year old Hispanic female was shot to death by police while riding as a backseat passenger in a car involved in a chase. While African Americans comprise 15 percent of Tulsa's population, 29 percent of those shot by police have been black.

Oklahoma is not a state that many people associate with the racial troubles of the "Old South." Yet, despite the fact that Oklahoma had not been a slave-holding state and that most black and white people had entered the state together when the land was taken away from Native Americans, Jim Crow laws took strong hold in the state. In 1911, the Oklahoma state legislature passed one of the infamous "grandfather" clauses, which limited voting to those whose grandfathers had been able to vote. This prevented most black people from voting. Even though the Supreme Court of the United States ruled grandfather clauses unconstitutional, Oklahoma continued a series of measures that prevented black people from participation in the ballot. There was segregation, and Oklahoma adapted to new technology by becoming the first state to segregate its telephone booths.

Oklahoma also had large Ku Klux Klan membership. By the mid-1920s, "it is believed that there were more than 100,000 klansmen in Oklahoma." In Tulsa, in December 1921, even though the Klan had only begun its recruiting drive in Tulsa the year before, there were 3,200 members of the local Klan chapter. The Tulsa Klan ran its own candidates for office. "In 1923, three of the five members of the Oklahoma House of Representatives from Tulsa Country were admitted klansmen." And, after 1923, "the Tulsa Klan grew so solvent that it built its own brick auditorium, Beno Hall -- short, it was said, for "Be No Nigger, Be No Jew, Be No Catholic" -- on Main Street just north of downtown."

But no discussion of Tulsa's history of racial justice can fail to take into account the long shadow cast by the events of May 31-June 1, 85 years ago in 1921. In an event that came to be known as the "Tulsa Race Riot," white mobs burned Greenwood, the black business district of the segregated city, down to the ground. In its destructive frenzy, the crowd burned 1,256 homes, plus the hospital, the library, and every business, church, and other building standing. Three hundred black people were murdered. No one was held accountable.

In 1921, Tulsa was a boomtown that had grown rich off the oil boom that had taken place with the discovery of petroleum in 1905. The total population of the city had multiplied to 100,000, and the city boasted fine buildings and markers of culture such as theatres, auditoriums, and performance spaces. But it was a deeply segregated city in which black residents and white residents had nearly no contact with one another. What little that white residents knew about their black neighbors came from newspaper reports and rumours and innuendo -- all of which would play a role in the disaster.

Two prior events played a role in what would happen. A few years prior, Tulsa police had allowed a white suspect to be kidnapped from the jail where he was being held and lynched by a mob in retributive justice. While such a jail-kidnapping had not occurred with a black prisoner, a precedent had been set that, under the right circumstances, the police would look the other way if the mob wanted to dispense justice.

Not surprisingly, in a city that was benefitting from an economic boom due to oil money and men coming in from oil fields, prostitution flourished in Tulsa. For reasons that remain unclear, on May 21, 1921, the Tulsa Tribune condemned lax policing for the prostitution industry in Tulsa, and emphasized that the transactions were facilitated by black pimps. "Commenting on the city's rampant prostitution industry, a former judge flatly told the investigators that black men were at the root of the problem. 'We've got to get to the hotels,' he said. 'We've got to kick out the Negro pimps if we want to stop this vice."

In the report compiled by an Oklahoma commission in 2001, the writers cite a publication contemporary with the riot, Exchange Bureau Bulletin that showed that the economic prosperity that was being enjoyed by most of Tulsa also created resentment at the idea that blacks might also be benefitting from the economic boom. In arguments that sound not unsurprisingly like those  of Donald Trump's followers, the idea that the "color line" was being erased caused deep anxiety that caused whites to feel violence toward African Americans.

On Memorial Day weekend, a seemingly innocuous need to use a toilet began the nightmare. Nineteen-year old Dick Rowland, who worked as a bootblack, needed to use the bathroom. He was unable to use the whites-only bathroom, but he worked for an employer who had arranged for his shoeshiners to use a "colored" bathroom at the top of a nearby building. In order to access the bathroom, black employees rode the elevator in the Drexel Building, which this particular day was operated by 17-year old Sarah Page, a white woman. Later witnesses say that the two knew each other and may have been lovers, but on this particular day, something happened. It is speculated that Rowland tripped while entering the elevator and grabbed Page's arm, startling her. She screamed. Despite the fact that Page did not allege such a thing, a white clerk who heard Page's scream then declared that Rowland had attempted to rape Page. Rowland fled back to his neighborhood -- being accused of raping a white woman was a certain way for a black man to be lynched.

The next day, police arrested Rowland. That afternoon, May 31, the afternoon newspaper -- the Tulsa Tribune wrote an article that recounted the "attempted assault" and emphasized that the victim was an orphan who was working her way through business college, thus increasing sympathy for her as a victim --  a victim who was kept mute during this whole proceeding. Somewhere in the newspaper -- all issues have been destroyed, but multiple witnesses have testified -- that a group was forming to "lynch the Negro."

The rumours of lynching electrified the white community. By 4:00 p.m., the police and sheriff were worried about the innuendo flying about town. Hundreds had gathered in front of the courthouse by early evening demanding that the young man be turned over to them.

The black neighborhood in Tulsa was known as "Greenwood" because Greenwood Avenue ran through it. Approximately 10,000 African Americans lived there. While there were large numbers of black people who lived in poverty in the area, the business district was its own complete city. There were dozens of black-owned businesses. Every kind of small business -- grocery stores, beauty shops, jewelry stores, photography studios, tailor shops, and much more -- a large number of restaurants, and a 750-seat theatre, the Dreamland Theater "that offered live musical and theatrical revues as well as silent movies accompanied by a piano player." There were two black-owned newspapers. There were 15 African American physicians' offices. A hospital. A large number of churches. A library. And a 54-room hotel, the Stradford Hotel.

The white mobs were frustrated by the sheriff's unwillingness to turn over Rowland. Meanwhile, the residents of Greenwood were following the events at the jail with fear, but also with a determination to fight back. Several World War I veterans from Greenwood with their service weapons went down to the jailhouse to let the crowd know that the black community would not be cowed. A shot was fired. The riot began.

During the night and the following day, the white mob invaded Greenwood. They pulled residents out of their homes and beat and killed them, including old people and children. They torched every building. Black people escaping Greenwood were arrested by the Oklahoma National Guard, who locked masses of them up in holding centers and only released them when white people stepped forward and vouched for individual black people.

The best estimates are that 300 people died during the riot, and 1256 structures were torched. While the Red Cross provided relief efforts for those thousands of people who had been burnt out of their homes, for which the city and county paid into the Red Cross relief fund, no compensation was paid to the victims of the violence. In addition, not a single white person was held accountable for any of the crimes committed May 31-June 1.

Despite a report filed in 2001 that detailed in full the destruction, and a recommendation that reparations be paid to those who lost their businesses and livelihoods on that day, no compensation has ever been paid. And, outside Tulsa, most people do not know that the Tulsa Race Riot ever occurred.

One of the impacts of the encounters between police officers and unarmed civilians has been the installation of dashboard cameras on police cars. Thus, the moment when Terence Crutcher, arms raised, is surrounded by police officers and then falls to the ground after being shot, is recorded for perpetuity. But, like the Tulsa Race Riot, it will only be part of history for as long as we tell and re-tell the stories. Understanding how encounters between cops and black men can turn deadly seems incomprehensible. Remembering history can help to put Terence Crutcher's name in long, painful context.

Opinion Guns
Report typos and corrections to: corrections@rawstory.com.
Like this article ? Text `Support` to 50123 to donate.
READ COMMENTS - JOIN THE DISCUSSION