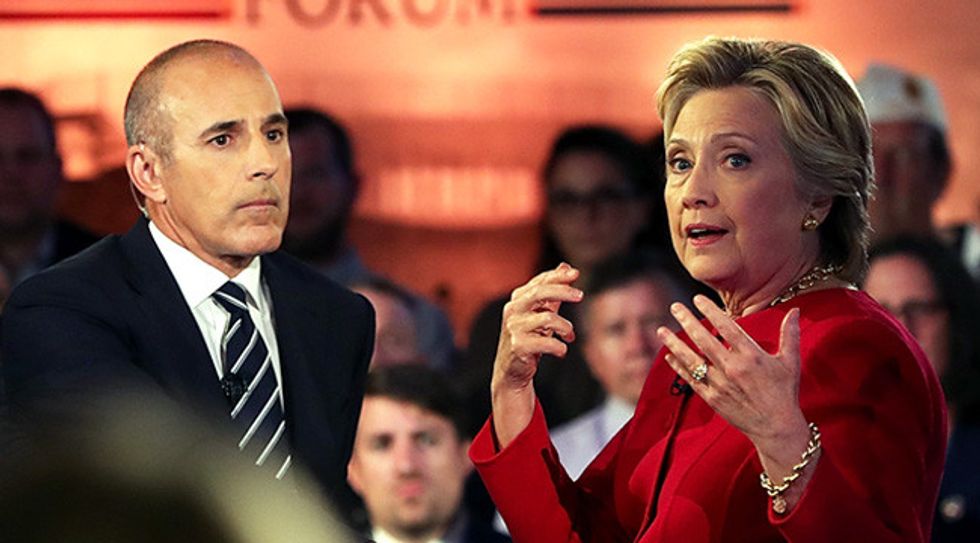 Lauer, who hosted the first discussion of its kind this election cycle, was widely mocked for the hour-long forum at the Intrepid Sea, Air & Space Museum in Manhattan. Critics accused Lauer of poor journalistic integrity and sexism, even launching the hashtags #LauerFail and #LaueringtheBar.

As the New York Times points out, Lauer spent over a third of his discussion with Clinton asking about her use of a private email server while rushing through questions about the Islamic State and similar national security issues. This, despite NBC’s billing of the event as a forum on veterans' issues.

Trump, on the other hand, was lobbed softballs, and Lauer declined to challenge the candidate on his flat-out lies, including when he boasted that he was against the Iraq war in 2003 (he wasn’t).

Political observers and journalists took to Twitter to target Lauer for his line of questioning.

Seriously -- everyone, and I mean everyone, knew this would happen. And Matt Lauer didn't have a followup planned? https://t.co/mm5ufZKjEx
— Paul Krugman (@Paul Krugman)1473295518.0

.@MLauer didn't cut @realDonaldTrump off ONCE like he did when he was determined to put a woman in her place. @MSNBC
— Andy Kindler (@Andy Kindler)1473302266.0

The morning after the forum, CNN's senior media and politics reporter, Dylan Byers, offered this sober and accurate assessment of Lauer's job:

“Political interviews, forums, town halls, debates, these are really big, significant deals. They’re especially big, significant deals given all that’s at stake in the 2016 election. You don’t send Matt Lauer to do a political reporter’s job. Look, in a debate, it might be fair to argue that you can let the two candidates fact-check each other. But when it comes to these one-on-one interviews, these forums, you have to step up and play that role. That onus is on you, and Matt Lauer didn’t do that. He certainly didn’t do that with Donald Trump. He didn’t do it on the Iraq War. He didn’t do it on a number of other issues and frankly, this criticism that he went a lot harder on Hillary Clinton than Donald Trump, I think, is well founded.”