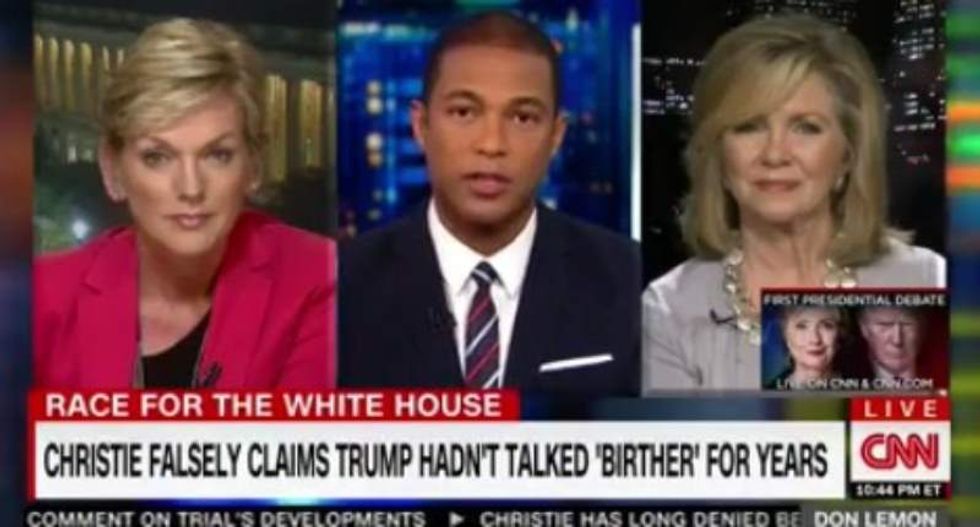 "Congresswoman, with all due respect, I know that's what you're here to do as a surrogate," Lemon replied. "But my question was, why do Trump surrogates continue to push something that is completely false, that he continued with the birther issue, and only just giving a 27-second response -- and by the way, the Clinton campaign did not bring it up."

Lemon then pointed out that the Republican presidential nominee told the Washington Post he would address the issue prior to issuing a one-sentence statement his surrogates (like Blackburn) have claimed should conclude any discussion regarding his birther conspiracy theories.

"It was his idea to come out and talk about the issue. It wasn't the Clinton campaign who brought it up," Lemon said.

"He said he was going to address it, and he addressed it," Blackburn insisted. "And he said that he had decided. He had changed his mind or had addressed it, and he moved on. I would like to see the Clinton campaign go back and address some of the questions about Benghazi."

Later in the segment, Granholm pressed Blackburn when she parroted Trump's attempt to blame Clinton for the birther issue.

"Jennifer, this is something you all think you can push on because you're in the tank," Blackburn responded.

"She's actually stating a fact, Congresswoman Blackburn," Lemon said, cutting in. "Facts do matter. Is there one instance that you can espouse or show of Hillary Clinton publicly pushing the birther issue?"