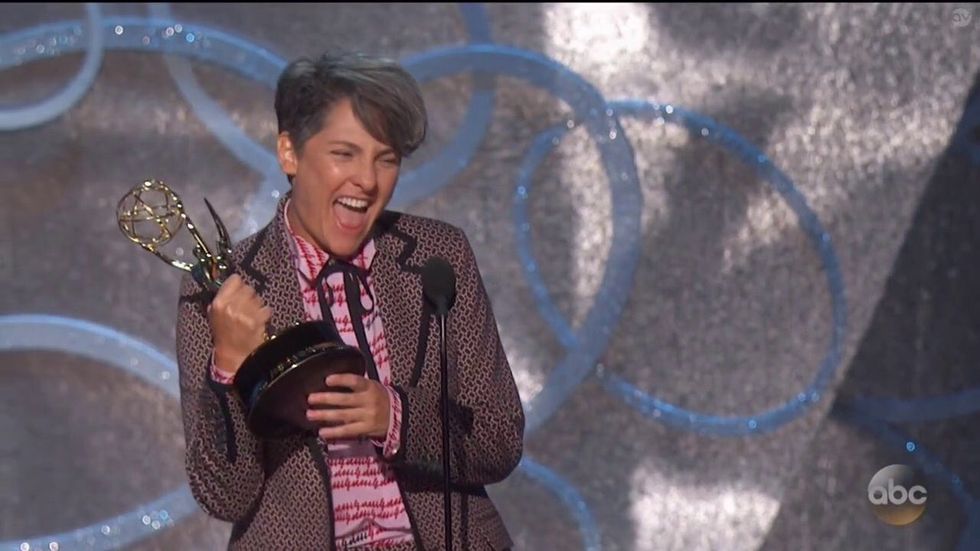 When accepting her Emmy Award for Best Director of a Comedy Series, Transparent director Jill Soloway made a moving and impassioned speech in favor of LGBT rights and diversity in popular culture.

"Holy crap!" she said as she stepped up to the microphone. Yeah, all right. Wow. People ask me if it's hard to be a director, and I tell them, no. Life is very hard. Being a good partner, mother, being a good person is hard. Being a good director is so f*cking easy. I get to make my dreams come true."

"It's a privilege, and creates privilege, when you take people of color, women, trans people, queer people, as the subjects of stories," she said. "You change the world, we found out."

"I've always wanted to be part of a movement. This TV show allows me to take my dreams about unlikable Jewish people, queer folk, trans folk, and make them heroes. Thank you to the trans community for your lived lives," she said.

Emcee Jimmy Kimmel said he wasn't sure how to respond.

"I'm trying to figure out if 'topple the patriarchy' is a good thing for me or not," he quipped.

Watch a .gif of one moment from the speech, embedded via Twitter: