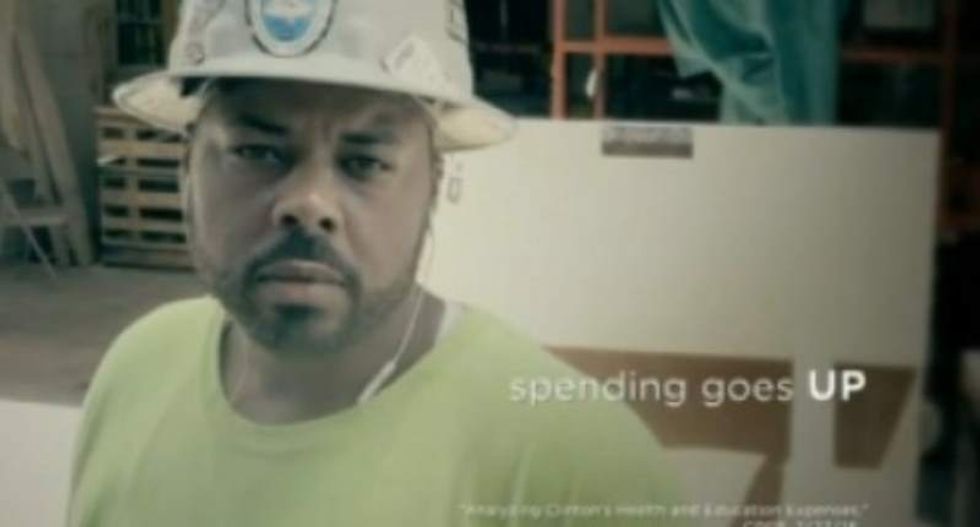 Calvin Anderson is seen in a campaign ad for Donald Trump, despite identifying himself as a Hillary Clinton supporter. (WCAU-TV)

The makers of a Donald Trump campaign ad are being accused of using people's likenesses under false pretenses, WCAU-TV reported.

"That's what Trump do," said Calvin Anderson, a Philadelphia man seen in Trump's "Two Americas" ad. "I mean, that's what he do. It's all part of the slandering part but I don't know why he chose me."

Anderson, a construction worker who is actually planing to vote for Democrat Hillary Clinton in November, said he was approached by a photographer outside his work site in July.

"We thought it had something to do with the building," he recalled. "Before you know it he said, 'Sign these waivers.' I'm like, 'Waivers for what?' And it had nothing on there about Trump."

Anderson's union, the Operative Plasterers' and Cement Masons' International Association, sent a letter to its members alerting them about Anderson's unwitting involvement in the ad, and calling on Trump's campaign to stop airing it.

"[Anderson] and others were intentionally misled and not told that his photo or image would be used for the specific purpose of a Donald Trump campaign advertisement," union general president Daniel Stepano said in the letter.

Likewise, Grethe Kiley said she was unaware that the film crew that set up outside John's Friendly Market -- her family's business in nearby Haddon Heights, New Jersey -- would be showing the store as part of the ad, with an unidentified model playing the part of a small business owner.

Since the ad debuted in Pennsylvania, Kiley said, longtime customers have threatened to stop shopping at John's out of anger that it would be associated with the Republican presidential nominee.

"My concern is, our image is being connected with a particular candidate," Kiley told Philly.com. "It just feels invasive and intrusive. Plus the fact that we were misled."

A Trump spokesperson, Greg Manz, said that he was not aware of the union's demand, and also rejected Kiley's complaint, saying, "The production company hired to film the stock images received permission from the store manager to film at the location."

WCAU's report, as aired on Thursday, can be seen below.