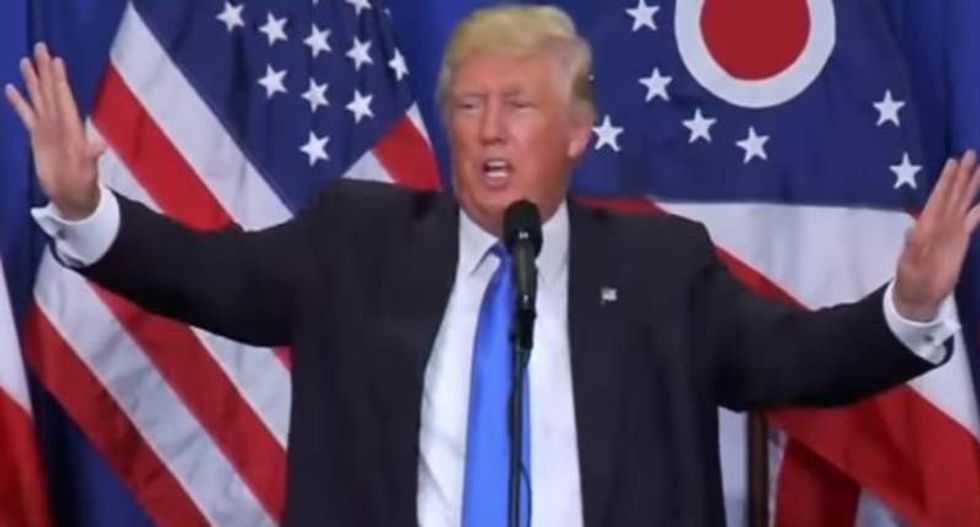 Donald Trump gives a speech in Cincinnati on July 6, 2016. (YouTube)

Republican presidential nominee Donald Trump spent his Friday morning in a white hot rage at CNN, calling the network "unwatchable" and lambasting a new documentary about his life and presidential campaign.

CNN currently employs Trump's former campaign manager Corey Lewandowski and regularly features guest appearances by Trump surrogates. However, the former reality TV star is incensed that he's not getting better treatment from a network he has repeatedly claimed that he never watches.

Late last night, Trump angrily tweeted about a Trump-themed CNN documentary, writing, "The documentary of me that @CNN just aired is a total waste of time. I don't even know many of the people who spoke about me. A joke!"

Friday morning, he wrote, "CNN is unwatchable. Their news on me is fiction. They are a disgrace to the broadcasting industry and an arm of the Clinton campaign."

He followed that up with a jab at CNN's current head Jeff Zucker, writing, "Jeff Zucker failed @NBC and he is now failing @CNN."

As NBC's Benjy Sarlin noted, Trump tweeted on June 27 and again on July 17 that he no longer watches CNN. Nonetheless, the real estate baron is continually tweeting about aspects of the network's coverage that displease him, which must be difficult to keep track of if he isn't watching.

On Aug. 10, Trump tweeted a message in support of failed Florida congressional candidate Dan Bongino, a retired Secret Service member who has had multiple, hot-headed rage meltdowns of his own.

"You were fantastic in defending both the Second Amendment and me last night on @CNN," Trump wrote. "Don Lemon is a lightweight - dumb as a rock."

On September 7, Trump wrote another message in support of a surrogate who appeared on CNN, saying, "Kudos to @PARISDENNARD for standing up to CNN's attempt to bully you and shout you down for defending @realDonaldTrump #media bias."

The day before that, he wrote, "@CNN is so disgusting in their bias, but they are having a hard time promoting Crooked Hillary in light of the new e-mail scandals."

For a man who claims he never watches the network, Trump seems to have very detailed knowledge of every single time they mention his name.

"Great visit to Detroit church, fantastic reception, and all @CNN talks about is a small protest outside. Inside a large and wonderful crowd!" he said on Sep. 3.

On that same day, however, he posted video from CNN.com of his visit to Great Faith Ministries in Detroit. Two days before that, he retweeted one CNN clip of himself speaking four separate times.

He repeatedly uses words to describe the network like "phony," "biased," "ratings-challenged" and "disgusting." And yet, like everything else about his campaign, Trump's antipathy toward CNN is a lie. He needs attention from the media, any media, including pro-Putin propaganda network Russia Today.