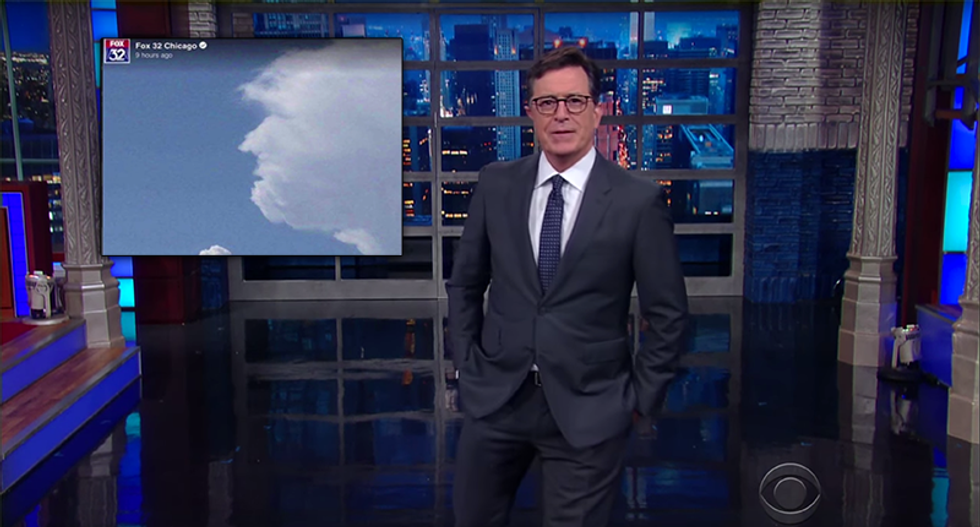 When it comes to Donald Trump and his supporters predicting their victory in November, they've begun using cloud formations to match their prophecy.

Wednesday night on Stephen Colbert's "Late Show," the host revealed a tweet from Trump's lawyer, Michael Cohen, that depicted a cloud formation similar to Trump's profile. Cohen captioned the photo, "In case anyone is unsure as to who will be our next #POTUS, the Lord has chosen the people's messenger."

In case anyone is unsure as to who will be our next #POTUS, the Lord has chosen the people's messenger. https://t.co/wopcDc7IVM
— Michael Cohen (@Michael Cohen)1472957549.0

Cohen later retweeted himself saying, "Yep, even the Lord, himself, is a fan of the #TrumpTrain."

"Yes!" Colbert exclaimed. "God made a Trump-shaped cloud. Though the cloud actually holds a position longer than the real Donald Trump can."

Colbert, a devout Catholic, admitted that God works in mysterious ways, "because, later that day, He also endorsed a sea horse, a ducky and your mother making love to the mailman," he said showing cloud photos.

This week, Trump also insulted Democratic rival Hillary Clinton by saying that she didn't have "the presidential look." Trump never clarified what "presidential look" entailed, but many online interpreted it to be a sexist attack because she is female and all presidents have been male.

Colbert agreed it sounded a bit sketchy. "Is it something in this area," he said, waving his hand over his face and then down to his genital region. "How can I put this? I think Trump is pointing out that you can't spell 'presidential' without 'penis' or, if you want to use all the letters, 'idle rat penis.' Which might be another sign."

He further admitted that Trump's remark made him ponder Clinton's "look," which she could easily borrow from past presidents. He then showed photoshopped pictures of Clinton with George Washington's hair, Abe Lincoln's beard, FDR's glasses and cigarette holder and William Howard Taft's morbid obesity.

Check out the hilarity in the video below: