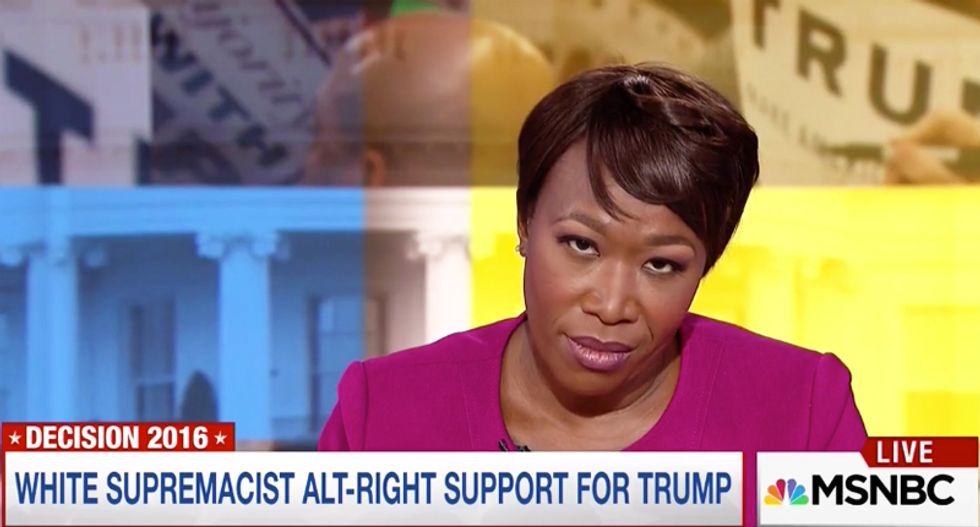 An avid Donald Trump advocate was met with laughter from the panel --and stony silence from from AMJoy host Joy Reid -- Saturday morning after stating that the GOP presidential candidate was running "an incredibly non-racist campaign."

After claiming that the Trump campaign has been "very clear" that it doesn't condone the racism, Cortes tried a new spin.

"I would remind you that Donald Trump, particularly compared to past Republican presidential candidates, is running an incredibly non-racist campaign, " Cortes asserted as guests Touré and radio commentator Dean Obeidallah burst into laughter as Cortes continued, "He's gone into the barrio and he is going into the inner-city and you can laugh, but we are appealing directly to people of color."

After host Reid gave Cortes her best, "I can't believe you actually said that" look, she snapped right back at him.

"Then why is it that Donald Trump is the most disliked and despised Republican candidate among people of color that we have had, probably in a generation?" she asked.

"That's not true," Cortes claimed. "He's polling right about where Romeny was."

The whole panel then joined in saying, "No. No. No he's not," as Reid gave Cortes a patronizing smile.

Touré then took the lead.

"People who say that racism is not central to this campaign: let me explain this to you," he stated. "This is a campaign that started with birtherism, continues with the wall, we're going to ban all Muslims and we're at war economically with the Chinese. Is there any person of color who the campaign is not at war with? I can't find one!"

Watch the video below from AMJoy: