WATCH: Trump's ex-campaign manager and ex-biographer tear into each other in epic shouting match 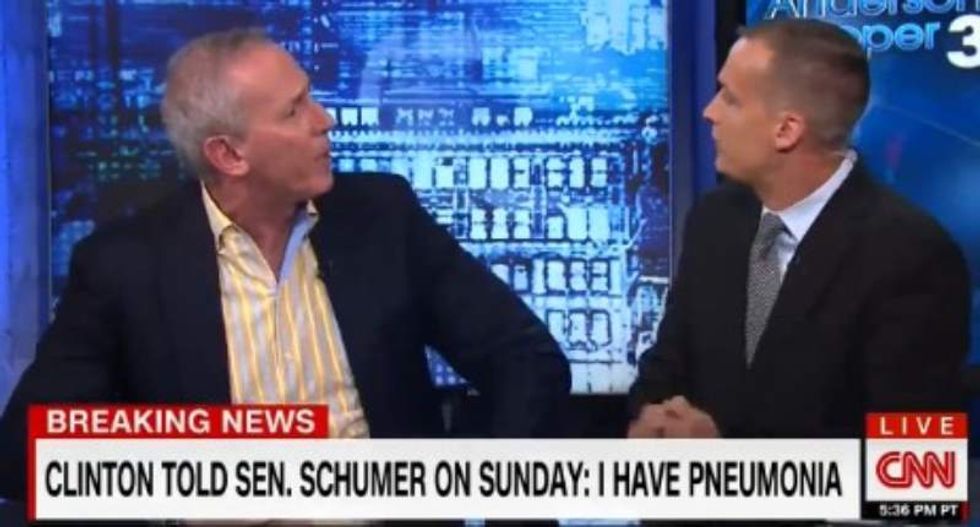 "Both of you are now experts in the medical field," Lewandowski said sarcastically.

"No, we're experts at reading -- unlike Donald Trump," Scwartz shot back.

"You have spent time with Donald Trump. Have you found him healthy?" Lewandowski asked Schwartz. "Have you ever seen a health issue [in] all the time you spent with him? 'Cause I spent 18 hours a day with him for 18 months, and all I've seen is this guy go, go, go, go, go."

"And neither are you a doctor," Quinn said from off-screen.

"What you're saying is that this doctor isn't qualified to make an assessment of Donald Trump," Lewandowski said regarding the physician, Harold Bornstein, before repeating to Schwartz, "You have spent time with him."

"I spent time with him this year," Lewandowski replied, not mentioning that he appears on CNN despite getting severance pay from the real estate mogul's campaign from his stint as Trump's campaign manager.

Fellow panelist Jeffrey Lord argued that, while he would advise Trump not to release his tax records, medical records would be "a little different."

"You didn't want to see it enough to be urging him to do the release of his medical records before," Schwartz told him. "Instead, he went to some cockamamie doctor he grabbed on an afternoon who wrote the illiterate statement about his medical records. Now [Trump's] gonna be the apotheosis of transparency?"

"If you go to the Summit Diner in Des Moines, Pennsylvania and ask people the biggest issue, this isn't it," said Lord, deflecting the question.