Why some Americans think Trump is the lesser of two evils 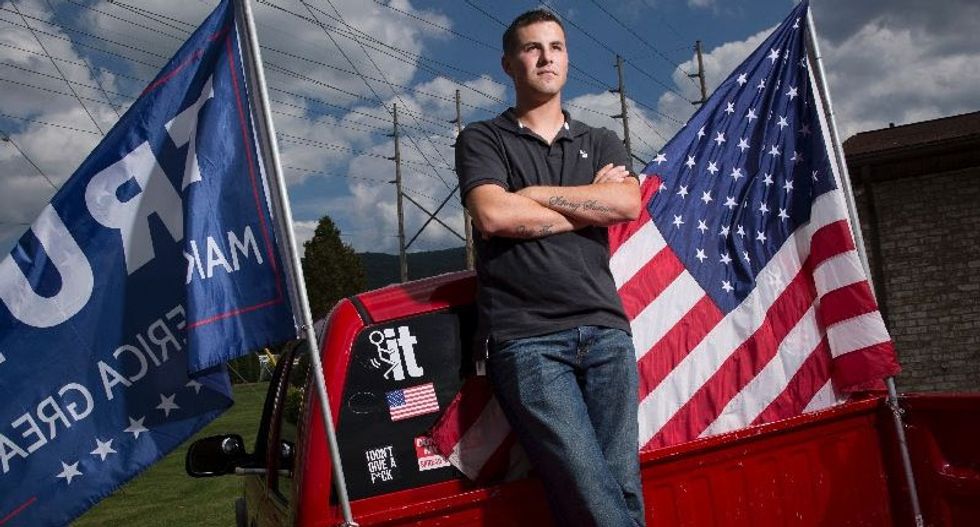 For some voters, Democrat Hillary Clinton in November is the clear choice for the White House -- after all, she certainly has more political experience than Republican rival Donald Trump.

But a trip through the American Rust Belt states of Pennsylvania and Ohio quickly reveals that for others, such logic doesn't hold much sway.

"Like anyone else, I have my misgivings about Trump," admits Alex Morton, a 67-year-old real estate attorney who voted twice for Democratic president Bill Clinton.

So, isn't Hillary the natural choice? No, says Morton. As it turns out, family values matter.

"If she had been an honest woman, she probably would have left him when she found out that he was a philanderer," Morton said.

"I would have had more respect for her if she had left her husband, but she didn't, so she's basically a completely dishonest person."

In Barberton, a small town not far from Akron in Ohio, one of the key battleground states in the November 8 battle for the White House, there are certainly some Democrats.

Pamela Mignano, who is 61, unemployed and on disability, came with her partner Alan Buckley to the town's Labor Day parade in early September.

"Mr. Trump sucks, just like his hair," Mignano said. "Out of the two evils, she's the least."

"Hillary pretty much ran the country when Bill was in office, because he was too busy out with his cigars and his whores," she added.

Buckley, a 66-year-old artist who carries a gun, interrupts her to say, "I don't care for either one."

Mignano replies: "Me neither. We're in trouble either way."

This rejection of both candidates shines through in opinion polls, which show that a majority of Americans have a negative view of both Clinton and Trump, and in the struggling Rust Belt, where many have fallen on hard times.

In southern Ohio, which is more rural and conservative, many Republicans shrug when asked what they think of their billionaire White House hopeful.

"I wish he was a little more couth. If my husband did that, I'd be whacking on him," Tracy Pierson, a 61-year-old cook at a golf course, said of Trump's brash campaign style.

"We have nothing to lose to go all in a different direction," she however added.

In this part of Ohio, the population more or less looks the same: Everyone is white, lawns are immaculately maintained, the Stars and Stripes adorns most homes, and sport-utility vehicles or pickup trucks are the norm, parked on gravel driveways.

Some Trump signs are on lawns -- never any Clinton signs here.

Don Krepps, a retired construction worker who lives alone with his dog, is one who is making his support for Trump known.

Krepps says he has always considered himself a Democrat but now considers himself an independent. He has never voted in a presidential election, though he says he liked Ronald Reagan, the Republican president in the 1980s. But this year, he will head to the polls.

"Just because of Hillary -- that's why I've decided to vote for Donald, because I just don't want Hillary to get in," he told AFP.

At his house, Fox News -- the network of choice for many conservatives -- blares in the background.

Why is he changing sides this year?

Too much crime, too many immigrants who come to the US and "kill innocent people," he says.

The neighboring town of Carrollton only sees a handful of crimes a year, but Krepps isn't swayed by the statistics that run contrary to his view.

Krepps's sister and brother-in-law live nearby, atop a hill. Mary Madison doesn't say much but her husband Jim says this election is the first time in his life that he doesn't know who he'll vote for.

"This is a sad commentary on us as Americans," he says.

Jim Madison doesn't believe in Trump but he is angry about what he sees as Democratic President Barack Obama's costly health care reform -- and by extension blames Clinton.

In Steubenville, Marc Barnes, a 23-year-old professor of philosophy, says he finds the whole campaign rather comical.

"It's like the two people that no one would want at a party decided to run for president, and the nation is looking on awkwardly, wishing they would leave the room, but they won't," Barnes said.

Barnes, who is a staunch Catholic, supported Clinton's one-time rival Bernie Sanders but says he cannot vote for Clinton because she is pro-choice on the issue of abortion.

He says he may consider a third-party candidate.

In town after town in the Rust Belt, the story is the same: people pull no punches in criticizing the former secretary of state and first lady.

Liar and criminal are among the choice terms they call her. Complaints about her use of a private email server while secretary of state, and her handling of the deadly attack on the US mission in Benghazi are common. Sometimes, people use more vulgar language.

"Lard-ass bitch. She should be in prison," said Milan Davich, 66, in Central Park in Johnstown, Pennsylvania, a onetime Democratic stronghold.

"One's a crook and the other one's a bragger," said the retiree, who nevertheless plans to vote for Trump.

"This country is full of morons, Americans are getting dumber by the day. Because all they want to do is look at their cellphones, and search for Pokemons -- they're just silly. All they want is to see what their friends ate for dinner on the internet."

Even Democrats are less than excited about Clinton.

Ryan Arnold, 29, a stay-at-home mother, loves Obama and was going to vote for Clinton.

But, she says, "all that stuff came out in the media" -- and now she doesn't plan to vote at all.

The father of her child, Raymond Garcia, offers a grim summary: "I think we're screwed either way."