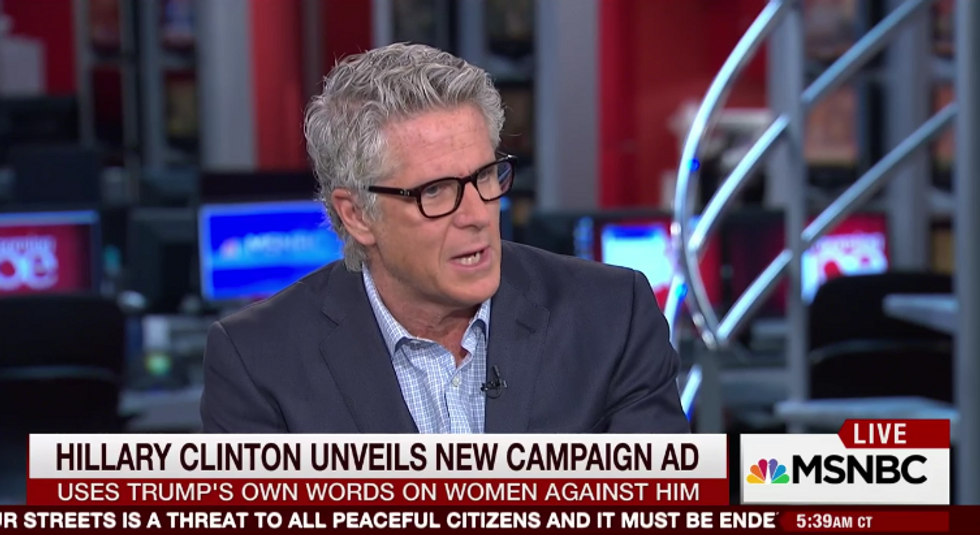 The Clinton campaign put out a new ad this week called "Mirrors" that shows young women looking at themselves in the mirror while clips of Donald Trump saying horribly sexist things play in the background.

Past Trump quotes played in the ad include:

At the end, the ad asks people to consider, "Is this the president we want for our daughters?"

MSNBC's Morning Joe panel showed the ad this morning and they thought it was very effective -- so effective, in fact, that some panelists had a visceral reaction to it.

"You grow up as a young girl and a young woman in America, and the first thing that you're hit with as a girl is all those types of things," said co-host Mika Brzezinski. "And it hurts."

"You want to punch him in that ad," he said. "You want to literally punch his face... to me, the biggest concern about a Trump presidency, beyond the nuclear codes, is how does it set up for our behavior?... He is setting the mark for what is appropriate, acceptable and even aspirational behavior."

New York Times reporter Nick Confessore's reaction to the ad wasn't quite as violent as Deutsch's, but it was still very direct.

"I have two daughters, I feel that ad right here," he said while pointing at his heart.

Pro Publica
A group of Georgia mothers has been trying to get certain library books banned by reading sexually graphic passages aloud at school board meetings. Now, after the board barred one of the mothers from attending, the group is claiming in a federal lawsuit that their First Amendment rights have been violated.

In essence, members of the group, which has dubbed itself the Mama Bears, are arguing that they’re being censored — in their own pursuit of censorship.

At a February school board meeting in Forsyth County, Georgia, Mama Bears member Alison Hair wanted to draw attention to a book that was available at her son’s middle school library, according to the lawsuit. Turning to a page from “Extremely Loud and Incredibly Close,” Jonathan Safran Foer’s 2005 novel about a 9-year-old boy whose father was killed in the 9/11 attacks, Hair began to read: “I know that you give someone a blow job by putting your penis ...”