Alec Baldwin kills it as Trump on SNL opener: 'They took my microphone to Kenya and now it's broken' 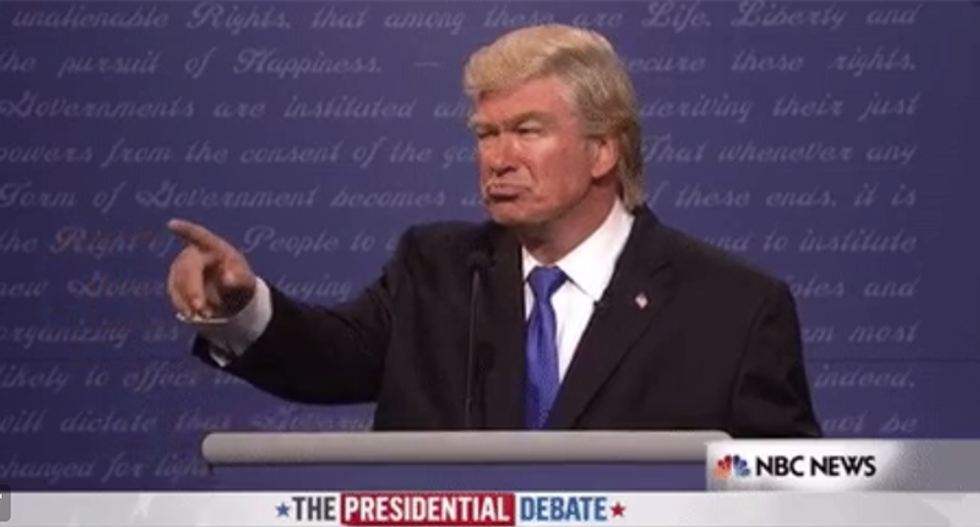 NBC has been promoting the Saturday premiere of "Saturday Night Live" all week and the first episode certainly didn't disappoint. Actor Alec Baldwin has been brought on to portray Republican presidential candidate Donald Trump until the November elections at the urging of former cast member Tina Fey, according to USA Today.

"She said, 'You know who would be a great Trump is Alec!'" executive producer Lorne Michaels recalls. "I talked to Alec, who was finishing a movie, he was getting ready to have a baby — it couldn't have been worse timing. But, slowly, the idea grew on me. People on the show liked it, and I thought he'd be great with Kate," he said referencing Kate McKinnon, who plays Hillary Clinton.

Baldwin donned Don's signature hair, pasted on some fuzzy eyebrows and pursed his lower lip and he was ready to go. Kate McKinnon came out coughing in a pantsuit and fell over doing a summersault like Willie Wonka.

At one point Baldwin refers to moderator Lester Holt as "jazz man" and perfectly pronounced China the way Trump often does. He then quickly takes credit for already winning the debate, "If Hillary knew how, she would have done it already. Period. End of story. I won the debate. I stayed calm. Just like I promised. And it is over."

Holt then told him he couldn't leave because it was a 90-minute debate.

"My microphone is broken," Baldwin as Trump said, looking panicked. "She broke it with Obama. She and Obama stole my microphone and took it to Kenya and they broke it and now it's broken."

He then starts sniffling and pretends like it's someone else before ultimately blaming it on Clinton. "She's been sniffling all night."

"Secretary Clinton, what do you think about that," Holt asks.

"I think I'm going to be president," McKinnon said.

When given time to respond McKinnon said, "Oh, its ok, he can have mine."

"The thing about the blacks is that they're killing each other," Baldwin as Trump said. He then went on to claim all of the blacks live on one street in Chicago and are shooting each other while McKinnon as Clinton stood aghast.

The Alicia Machado issue came up and Trump quickly turned his attention to calling Rosie O'Donnell names. McKinnon as Clinton began to cry because the debate was going so well.