Ana Navarro rips Trump's ‘rigged’ whine: 'It's rigged when a billionaire pays no taxes and gets away with it’ 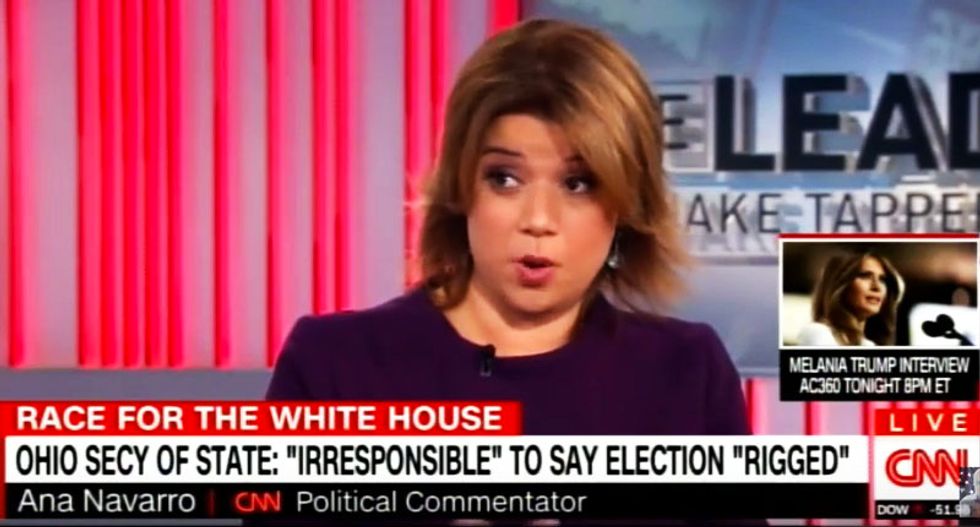 Frequent Donald Trump critic Ana Navarro got in a dig at the GOP presidential nominee Monday afternoon, responding to the candidate's daily complaint that the election is "rigged."

Speaking with CNN host Jake Tapper, the GOP consultant used a bit of her own history to explain what a real "rigged" election is.

"He's trying to set it up so that when he is a 'loser'" Navarro snarked while using air quotes, "A word that he might be physically allergic to, he can then blame it on somebody else."

"Let me tell you this," she continued. "I come from Nicaragua. I come from a country where the elections have been rigged. Where there's been communism. I know people who come from Cuba. I know people who come from Venezuela. Those are rigged elections. Yesterday I was at Mt. Vernon, and it inspired me to think what those Founding Fathers went through to set up this system. Is it a perfect system? It's not. But stop calling it a rigged system so you can start setting up your alibi."

When Trump-backing former Congressman Jack Kingston pivoted to say that he approved of poll watchers, Navarro cut him off saying, "That is dramatically different."

"Let me tell you what's rigged!" she explained. "It’s a rigged system when a billionaire can pay no taxes and get away with it!"