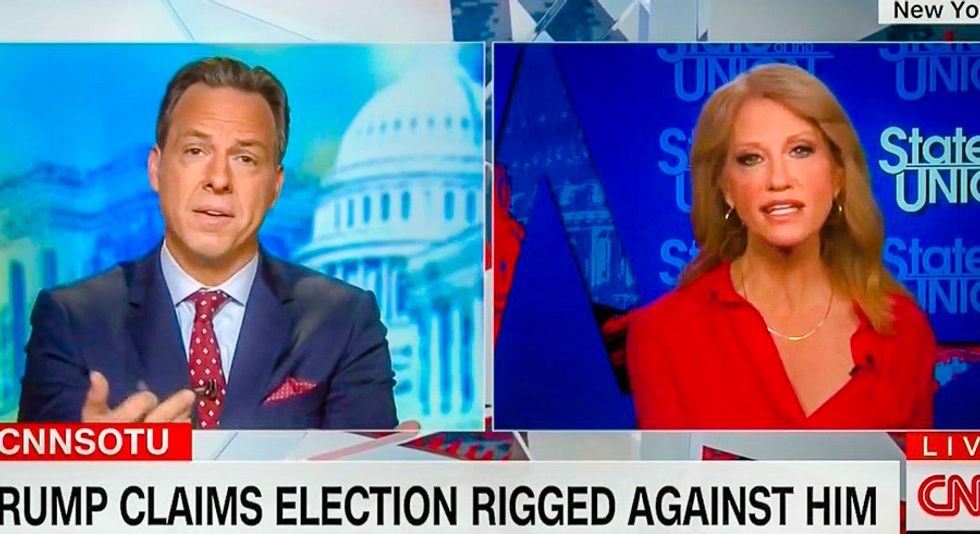 CNN host Jake Tapper on Sunday reminded Trump campaign manager Kellyanne Conway that she had been against her bosses "rigged" election claims in April before he paid her to to start defending them.

On Sunday's State of the Union, Tapper noted that there was "no real evidence" to support Donald Trump's claim that the election is being "rigged" against him.

"Back in April when you were working against Donald Trump, when you were working for Ted Cruz and advising his super PAC, you had some tough words for Mr. Trump when he was lashing out at the time against the system being rigged," Tapper told Conway before refreshing her memory with a video clip.

"We hear from the Trump campaign, the rules change, it's not fair," Conway had said in April. "He can whine and complain all he wants that he didn't know the rules."

"We love watching that clip together," Conway quipped. "That was about what was happening on the weekends. When Donald Trump would win the vote, he would basically win all the electoral votes in a state, and on the weekends, the Cruz campaign would go back and follow the rules and get back some of those delegates. So no, it's not a pattern for him."

Trump's campaign manager went on to assert that "the system is rigged, especially against the little guy."

"His entire campaign is built about the little guy being the victim, the forgotten man and forgotten woman being the victim of the rigged corrupt system," she concluded. "Let's keep the focus there. That's who he's fighting for. I know so many in the media like to just dismiss the crowd sizes. Let me tell you something, you go out on the road with Donald Trump, this election doesn't feel over."