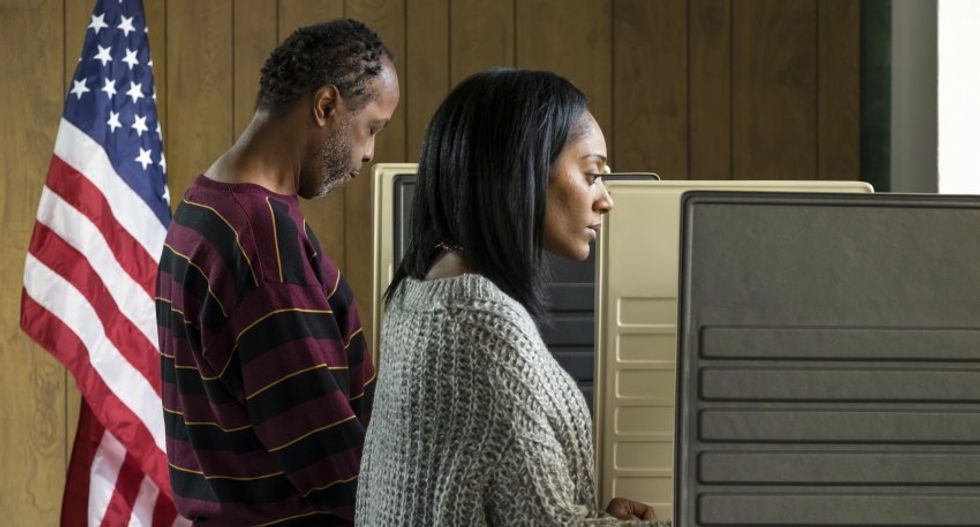 Despite polls showing Hillary Clinton with many Electoral College paths to the presidency and a growing likelihood of Democrats recapturing the Senate, voting rights groups in battleground states say GOP-led partisan voter suppression efforts may block tens of thousands of people from voting this fall, which would cut into what’s being described as a rising Democratic tide.

“At this point in the election cycle, it is too late for states to engage in voter suppression efforts, at least in terms of (new) laws. But we do know that if experience tells us anything, that state-sanctioned voter suppression still happens, both at the state among local level through the actions of elections officials,” said Judith Brown Dianis, a civil rights attorney and executive director of Advancement Project, one of the nation’s foremost voting rights defenders.

“The other concern that we have for this election cycle is we may see anti-democracy vigilantes being engaged and erecting barriers to the ballot. We know there have been fake calls around voter fraud, and calls for vigilantes to be at the polls,” Dianis said. “The Trump campaign, and other lawmakers at state and local levels, have repeatedly lodged false claims about voter fraud that they say is widespread, and the Trump campaign has gone even further calling for aggressive poll watching and to police voters.”

Dianis notes Trump's "continuing narrative of conjuring up the boogie man who is going to steal an election while he’s trying to undermine the integrity of our election through these false claims.”

Dianis spoke at a briefing with leading voting rights activists from a half-dozen swing states where each described differing obstacles and barriers to voting. In Ohio, Florida and Georgia, there was a strong likelihood, for varying reasons, that tens of thousands of people who expect to vote might not be on the official voter rolls by November 8. In other states, like North Carolina, it was still unclear if traditional options, like early voting, would be curtailed.

That picture is at odds with the latest presidential campaign polling such as Tuesday’s survey of 15 battleground states by the Washington Post which found Clinton ahead in nine states (New Hampshire, Virginia, Michigan, New Mexico, Colorado, North Carolina, Pennsylvania, Wisconsin, Georgia) and on track, Post analysts said, to win more than 300 Electoral College votes (270 are needed for the presidency).

For example, in Georgia and North Carolina, two states where WaPo’s surveyput Clinton ahead of Donald Trump by 4 percent and 6 percent, respectively, voting rights activists said there are barriers taking shape that could end up cutting into her lead.

In Georgia, Nse Ufot, executive director of the New Georgia Project, said more than 550,000 people have registered as new voters since the March primaries. But the process of validating those applications by election officials in 159 counties has been delayed, she said, in part by a lawsuit contesting a verification process that disqualified voters over easily resolved typos. That suit was settled a few weeks ago, Ufot said, but a backlog remains. “We find they [county election offices] are all along the ideological spectrum and the competence spectrum, if you will… what voter suppression looks like in Georgia is death by 1,000 cuts.”

In 2012, the New Georgia Project submitted 86,000 registrations, but only 40,000 people ended up on voter rolls on Election Day. What’s unclear is to what extent that history of constitutional voter suppression may repeat itself in 2016. Looking past registration issues, Ufot said that many counties moved or consolidated polling places in communities of color last spring to cuts costs, which caused confusion and raises questions about what’s planned for November 8.

North Carolina is facing different would-be barriers. After the U.S. Supreme Court gutted the enforcement provisions of the 1965 Voting Rights Act, that state’s Republican-led government quickly passed a package of laws designed to discourage likely Democrats from voting. While many of those laws have been overturned by federal courts, Sabrina Khan, an attorney with the Advancement Project, said early voting options are still not clear in several counties with large communities of color. In 2012, 70 percent of the state’s blacks voted early, she said.

Ohio and Florida are considered toss-up states, meaning the race is too close to predict. In each, different categories of voters face sizable administrative hurdles. In Ohio, after a federal court sided with voting rights activists, the secretary of state was told to put 70,000 people back on voter rolls—he had removed them because they had not voted since 2012, which clashed with the voter purge timetable in the National Voter Registration Act. However, it's unclear what their status will be on November 8, said Donita Judge, Advancement Project attorney, because the state has not yet said how it will proceed. In 2004, George W. Bush beat John Kerry by 118,000 votes in Ohio, underscoring how throwing 70,000 votes into limbo could have major implications. The WaPo poll said Trump was leading by 3 percent.

Maria Rodriguez, executive director of the Florida Immigrant Coalition, said grassroots groups had registered 330,000 new voters in communities of color. But 66,000 Floridians who filed the paperwork with federal officials to become U.S. citizens with the hope of voting this fall have not had that paperwork processed in time, she said. Meanwhile, in Virginia, where there is an ongoing battle between the state’s Democratic governor and its Republican legislature over restoring voting rights to ex-felons, about 13,000 people have been taken off that state’s voter rolls.

These accounts from the front lines of swing states suggest that if the race for the White House or control of the Senate tightens, then voter suppression tactics may come into play deciding outcomes.

Consider Georgia. In 2012, 3.85 million people voted, with Mitt Romney beating Barack Obama by 300,000 votes. Right now, according to the Post's survey, Clinton leads Trump by 4 percent. If the 2016 turnout is on par with 2012, that’s slightly more than 150,000 votes. Thus, how Georgia county election officials process more than half-a-million registrations could be decisive.

That’s why progressive voting rights lawyers are not taking comfort in the latest polls forecasting a blue wave, or put at ease by the unprecedented online tools available to help people register, check their required voter ID and find their precinct. Instead, the lawyers are focused on nuts-and-bolts barriers to voting.

“We continue to see these kinds of [suppressive] actions all over the country as our protection under the [federal] Voting Rights Act has been weakened,” said Judith Brown Dianis. “We are continuing to towns with voter registration groups to get people on the rolls. We want to make sure that they get on the rolls, that they stay on the rolls, and that we also eliminate barriers to voting.”