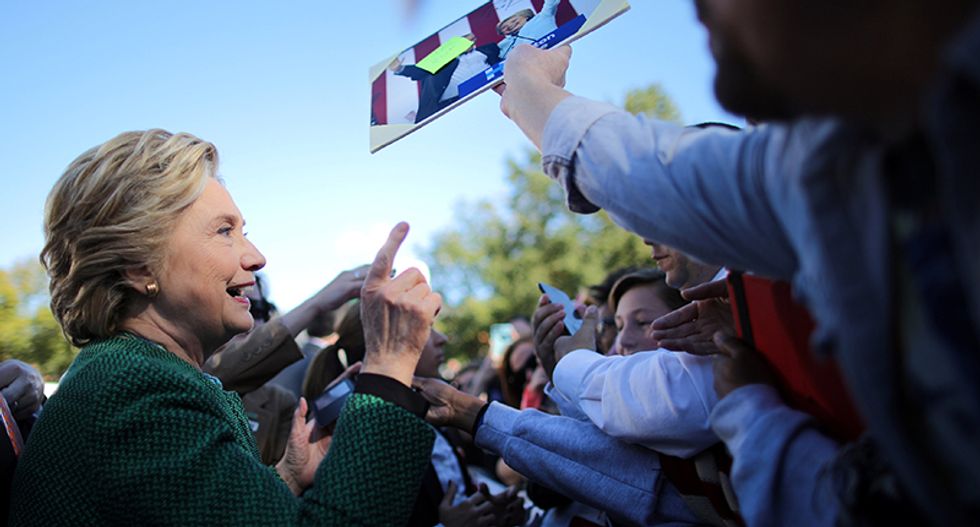 Democratic presidential candidate Hillary Clinton called Donald Trump a "sore loser" on Sunday because of his refusal at their debate last week to commit to accepting the results of the Nov. 8 election.

Clinton, a former secretary of state, said Trump's comments were more consistent with what dictators in non-democratic countries might say about their opponents.

"To say you won’t respect the results of the election, that is a direct threat to our democracy," Clinton told a rally at the University of North Carolina at Charlotte. "The peaceful transfer of power is one of the things that makes America America."

"And look, some people are sore losers, and we just got to keep going," she added.

Earlier on Sunday, Kellyanne Conway, a top Trump adviser, acknowledged that the Republican presidential candidate was lagging behind Clinton ahead of the election.

Conway said Clinton had "tremendous advantages," including a large campaign war chest that had allowed her to spend millions on television ads.

"We are behind," Conway said on NBC's "Meet the Press." But she added the Trump campaign was looking to sway undecided voters not ready to support Clinton.

As the polling gap has widened, Trump has said repeatedly the election is being "rigged" against him. He has not offered evidence and numerous studies have shown that the U.S. election system, which is decentralized and run by the states, is sound.

At last week's debate with Clinton in Las Vegas, Trump was asked if he would honor the result of the U.S. election.

"What I'm saying is that I will tell you at the time. I'll keep you in suspense. OK?" Trump said.

As she visited North Carolina, Clinton urged her supporters to participate in early voting.

"From now until Nov. 5, you can vote early at any voting location in your county. And you know, this is a big deal,” Clinton said at a campaign event in Raleigh.

Campaigning in Naples, Florida, on Sunday, Trump also encouraged voters to go to the polls to vote both for him and Republicans running for Congress and other offices.

"You have 16 days to make this happen, but you have to get out and vote, and that includes helping me re-elect Republicans all over the place."

"I hope they help me too. Be nice if they help us too, right?" said Trump, who has sparred with many prominent members of his party, including U.S. House of Representatives Speaker Paul Ryan, the country's top elected Republican.

The latest Reuters/Ipsos poll released on Friday had Clinton leading Trump by 4 percentage points, and the most recent State of the Nation project showed Clinton with a 95 percent chance of winning the 270 Electoral College votes needed to secure the presidency.

An ABC News poll released on Sunday morning had Clinton leading with 50 percent of likely support, compared with Trump's 38 percent. The poll found that the number of Republicans who said they were likely to vote fell 7 percentage points from mid-October.

As Trump battled to win over undecided voters, advisers and members of his inner circle sought to downplay his remarks about the integrity of the election, in an indication he would come under significant pressure to accept the election results if he were to lose.

Republican Party Chairman Reince Priebus said that by asking Trump to agree to concede, the media were making an extraordinary request. He said Trump would only fight if the election were close and was not trying to dispute a fair election.

Trump's son Eric said on Sunday that Trump would "100 percent" accept the results of the election if the outcome is "fair."

“I think what my father is saying is, 'I want a fair election,’” Eric Trump said on ABC's "This Week." “If it’s a fair outcome, he will absolutely accept it. There’s no question about that."

On Sunday, Trump picked up his first endorsement of the general election from a major newspaper when the Las Vegas Review-Journal backed his candidacy. The newspaper is owned by Republican mega-donor Sheldon Adelson, who has been reluctant to donate to Trump. In 2012, Adelson spent about $150 million trying to help elect Republican Mitt Romney.