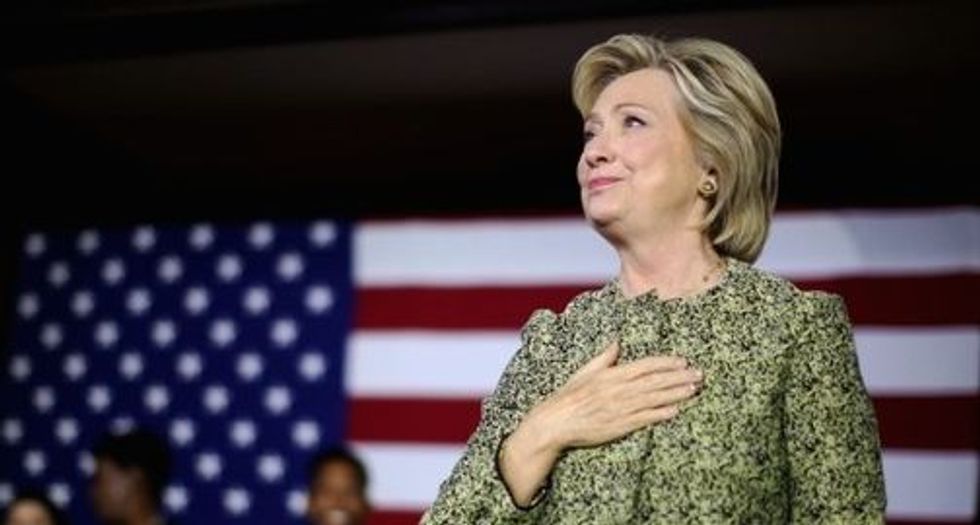 The Sept. 30-Oct. 6 opinion poll showed that 43 percent of likely voters supported Clinton while 38 percent supported Trump. Clinton has consistently led Trump by 4-6 points in every weekly poll since the beginning of September.

During this period, the candidates faced off in the most-watched presidential debate in history - a matchup that a majority of Americans believed Clinton won. The New York Times also released portions of Trump's 1995 tax returns that showed the celebrity real estate developer had reported a loss that was big enough to have allowed him to avoid paying personal taxes for a number of years.

Clinton and Trump will meet again in their second debate on Sunday night, which will be in a town hall format, with the Nov. 8 election fast approaching.

At this point in 2012, the race was tighter between Democratic President Barack Obama and Republican challenger Mitt Romney: Obama led Romney by less than 2 percentage points among likely voters in the Reuters/Ipsos poll during the first week of October. The incumbent eventually won the 2012 election by nearly the same margin in the popular vote.

This year, however, both candidates appear to have a bigger opportunity to shake up the race and improve their numbers in the final weeks, given that a larger proportion of the electorate appears to be uncommitted.

When asked in the poll, roughly one out of every five likely voters would not pick either major party candidate and instead selected options such as "Other," "Wouldn't Vote" or "Refused." That was twice the number of uncommitted voters as there were in the Reuters/Ipsos poll at the same point in 2012.

The Reuters/Ipsos poll is conducted online in English in all 50 states. The poll included 1,695 people who were considered likely voters due to their registration status, voting history and stated intention to vote in the election. It has a credibility interval, a measure of accuracy, of 3 percentage points.

National opinion polls have differed this year in how they measure support for Clinton and Trump. Some polls, like Reuters/Ipsos, try to include only likely voters, while others include all registered voters. The Reuters/Ipsos tracking poll also gathers responses every day and reports results twice a week, so it often detects trends in sentiment before most other polls.

An average of major opinion polls aggregated by RealClearPolitics showed Clinton ahead of Trump by 5 percentage points on Friday.