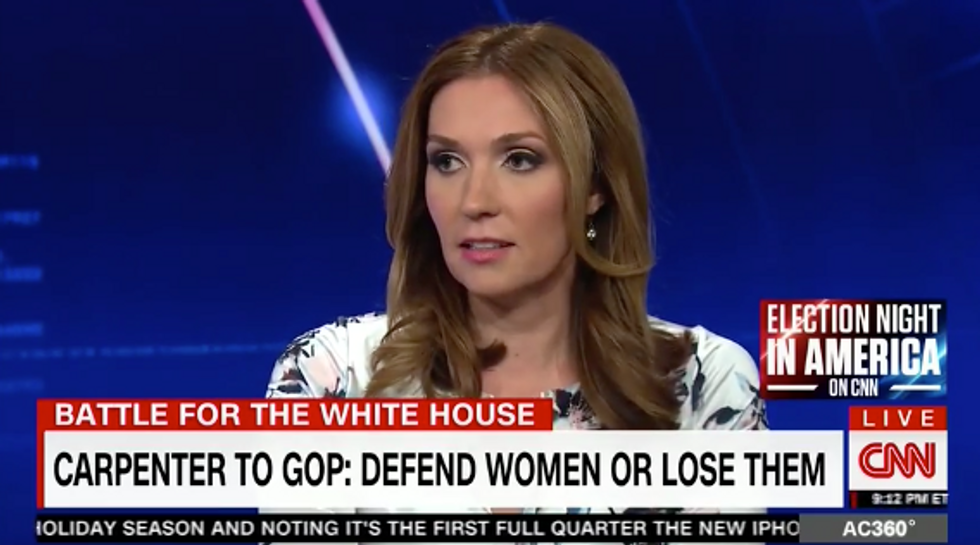 On Tuesday night's Anderson Cooper 360, Republican political advisor Amanda Carpenter called out the entire party for letting its nominee Donald Trump get this far. Specifically, she called out the party for not standing against his misogyny.

She started off with a bold claim that, "Somehow this decision was made along the way during the primaries that it was OK to appeal to this very angry, vulgar, alt-right section of the party at the expense of women. There are signs being printed and shirts being made. I can't even repeat what is on those shirts."

At the end of the day, her point rings true. It's on them. Carpenter explained that her fire is not aimed at Donald Trump, but at men within the party generally.

She says, "I want men in the Republican party to be accountable for not standing up and defending women," adding, "Where are these conservative men that talk about family values, but then go on tv and defend locker room talk? That's not OK."

When it came down to solutions, though, Carpenter's head was in the right place. "They need female supervision from now on," she says.

Trump advocate Kayleigh McEnany, as usual, came to the Republican nominee's defense, suggesting that the party needs to think about the Supreme Court justices that his Democratic counterpart would appoint.

Carpenter had an answer, though. She shot back unapologetically and said, "Once you have someone who has tyrannical impulses in the White House, forget the Supreme Court, it's over. This guy has no boundaries."