Colbert shocked after Trump ‘groped the American flag’: ‘We salute the flag — we don’t dry hump it’ 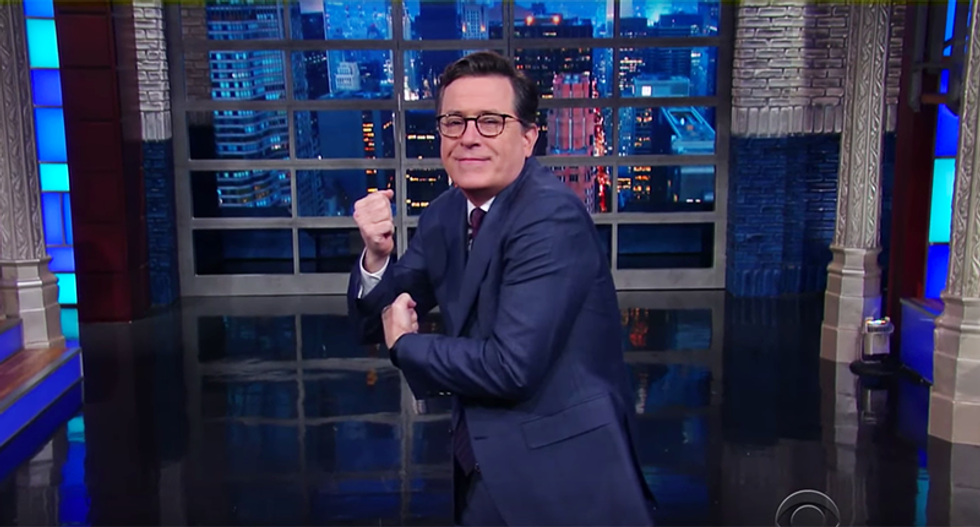 After all of Donald Trump's problems with grabbing women or claims of grabbing women, one would think he would avoid doing anything publicly that would reinforce those tendencies. But no.

In a rally this week, Trump walked out on stage opening his arms, not to a family member or to some surrogate that had just introduced him. He grabbed the flag. Most political servants love America, but perhaps Trump was trying to convey that he loves America enough to grope it.

"That's right," Colbert began. "Donald Trump just groped the American flag. You know, they let you do that if you're a star."

Colbert said it made him feel sorry for the flag, though. "The flag just had to sit there and take it, because those colors don't run."

He confessed that he was watching television when it happened and had to run his DVR back three times to figure out what had just occurred. "To make sure I wasn't having a stroke."

He put a screen capture back on the screen of the incident. "We didn't mock that up! That's insane! He knows we salute the flag in America, right? We don't dry hump it."

Pretending to dry hump the flag, Colbert moaned in faux ecstasy. "Who does that?!" he exclaimed. "I don't even know how to describe what he's doing! Or he's giving it a reach-around, I'm not sure. This is the moment in the movie where we find out he's an alien, by the way. This might be the only time in history a flag burns itself."

Colbert said he was shocked to see Trump go after "Old Glory" like that. "Normally he goes for much younger glory."

If that isn't bad enough, at a Trump rally Tuesday, Trump was excited to show off a sign behind him reading "blacks for Trump." He told the audience, "you watch, you watch," a throwback to his assertion that he will win the African-American vote.

"Well, we did watch and that sign is being held by a middle-aged white lady," Colbert pointed out. "Maybe her name is Doris Black. And she's proudly there representing the Black family." Colbert also thought that since we can't see the back of the sign, it could read: "Blacks for Trump, exist somewhere."