Corey Lewandowski defends Trump’s complete lack of a ‘ground game': ‘You can do this over the internet' 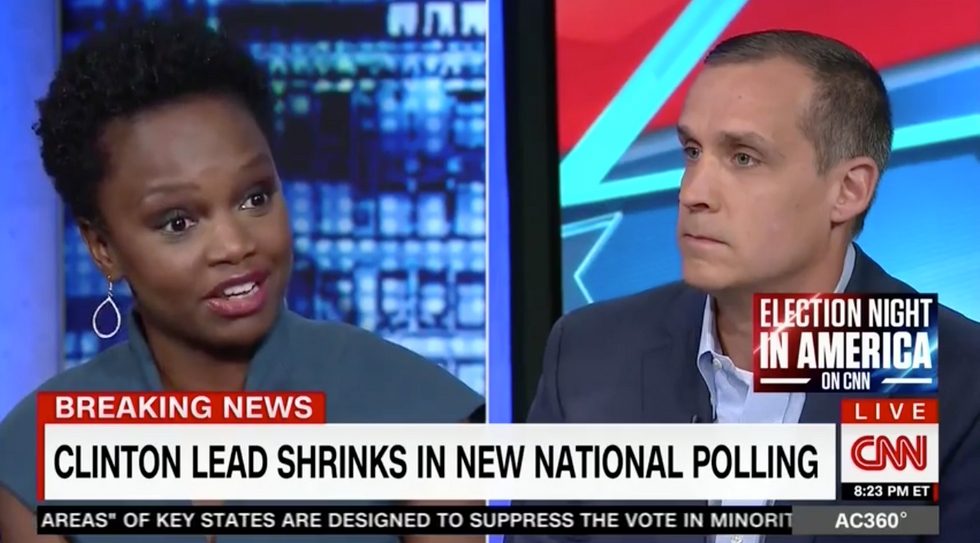 During Wednesday night's Anderson Cooper 360, Democratic and Republican panelists duked it out over the importance of grassroots work on campaigns. Democratic consultant Jonathan Tasini pointed to this being one reason why his party is leading in early voting this year.

"In close states, in a close election," he says, "the ground game the Democrats have is good for at least two or three points in those races. Hillary Clinton has 80+ offices in Florida. Donald Trump has almost nothing."

Tasini also explained that part of why Trump didn't put his own ground game together was due to the GOP nominee's continued feud with the Republican party.

Cooper turned to Trump surrogate Scottie Nell Hughes for some input. "It depends on what kind of ground game you're talking about," she started. "This just shows the difference between the two campaigns."

She suggested the difference in strategy was largely due to Clinton basing her ground game on politicians, whereas Trump built his around his supporters.

Former Trump campaign manager Corey Lewandowski didn't pass up the moment to say something inflammatory. "Have you ever walked into Amazon and bought something?," he asked. "Of course not."

Lewandowski suggested that the notion of having campaign offices was simply outdated. He said, "You know what they have now? They have cellphones. They have phones, you can call from home. You can do these things over the Internet. You don't need to bring all these people in 80 offices around the state. It's ridiculous."

That's when MoveOn spokesperson Karine Jean-Pierre chimed in — and she was not happy.

"As someone who worked on the 2008 and 2012 campaigns, that is insulting what you just said because it's just not true," Jean-Pierre explained, before adding, "Having a face to face program and knocking on doors and talking to voters actually works."

Everything went even further down the rabbit hole, however, when Republican strategist Jeff Lord started questioning whether Democratic early voters were voting for Clinton.

"Why do you assume they are all voting for Hillary?," he asked.

Tasini, who was clearly exasperated at that point responded, "Come on. Now we're dealing at the UFO kind of level."