'Do Not Resist' documentary highlights crisis of police militarization 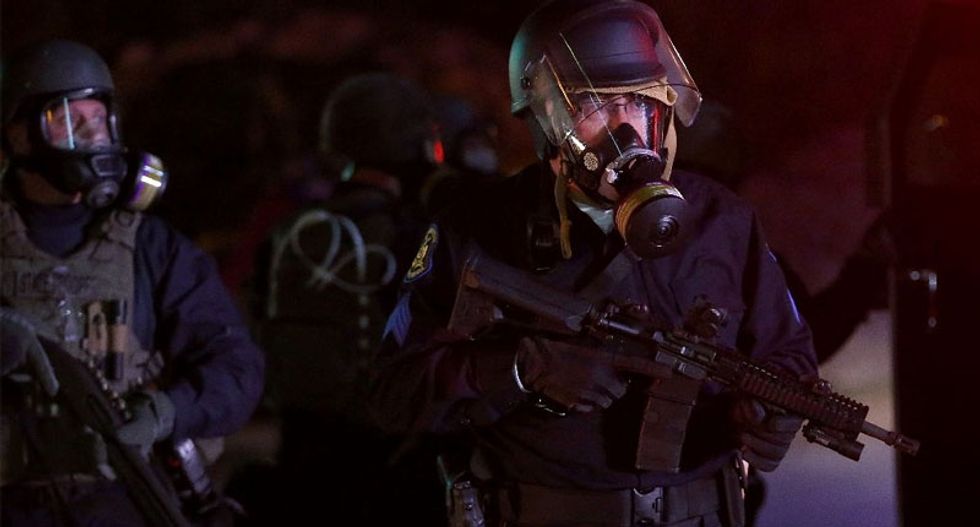 Officers with assault rifles, backed by a huge armored grenade launcher, square up to a crowd furiously denouncing the killing of a young black neighbor.

It is a scene which could have been taken from archive footage of Mogadishu in 1990s Somalia or countless other battles, but this conflict is closer to home -- the streets of small-town America.

The images, captured in Ferguson, Missouri in 2014, open "Do Not Resist" -- a disturbing documentary charting the transformation of police across the US into forces that look like military units.

The explosive film is set to fuel an already bitter debate raging in America over heavy-handed law enforcement, following a litany of police killings of black men that have sparked protests from Ferguson and Charlotte to Chicago.

Director Craig Atkinson, whose movie is opening across the US having won best documentary feature at the Tribeca Film Festival, says the American law enforcement ethos has changed "from a mentality of peacekeepers to that of an occupying army."

Another eye-opening scene shows officers in black fatigues firing volley after volley of automatic rounds at cardboard targets, as if they were preparing for war rather than to "protect and serve."

A khaki-clad instructor explains that security forces must prepare for all kinds of attacks, "including the Islamic State."

MRAPs, the armored trucks that protect troops from roadside bombs planted along the dusty roads of Iraq and Afghanistan, are now ubiquitous across the US.

They are provided by the Pentagon through a program of surplus giveaways that has amounted to $5 billion since former president Bill Clinton signed it off in 1996.

In another shocking scene, a SWAT team arrives in an MRAP at a tree-lined street in Columbia, South Carolina, to execute a search warrant in a drug case.

The officers, whose equipment looks barely distinguishable from that of an infantry division, end up badly damaging a family home in a raid that nets a small amount of loose cannabis.

Atkinson's father, a retired policeman from Detroit, Michigan, spent over a decade in one such SWAT team, the New York-based filmmaker explains.

"In his time, his team intervened 29 times in 13 years. Now they are taking part in 200 raids a year," Atkinson tells AFP.

Faced with a growing backlash against police killings, particularly in black communities, Terrence Cunningham, the president of the International Association of Chiefs of Police (IACP), has admitted that law enforcement officers have been "the face of oppression to far too many of our fellow citizens."

He told a conference in San Diego on Monday that police needed to apologize for "the actions of the past and the role that our profession has played in society's historical mistreatment of communities of color."

Campaigners against police militarization accept that SWAT teams and their heavy-duty hardware have a vital role in combatting the rare instances of terrorism in the US.

But they point out that, due to prolonged mission creep, this is no longer how these resources are used.

Peter Kraska, a criminology professor at the University of Eastern Kentucky, says there are now at least 50,000 SWAT raids a year, up from 3,000 in the 1980s.

Most of the activities of these highly specialized units have little to do with the reasons for their inception, such as dealing with hostage situations, terrorist attacks and drug cartels.

According to Atkinson, one of the architects of the "warrior culture" is a hugely successful police trainer named Dave Grossman, head of a consulting firm called the Killology Research Group.

"We are at war and you are the frontline troops in this war. What do you fight violence with? Superior violence," Grossman hollers at an audience of mesmerized police in one session filmed for the documentary.

The retired army lieutenant colonel has lectured throughout the US, according to his website, and Atkinson believes his influence has spread to every American law enforcement agency.

"There are 63 million police interactions with citizens each year in the United States, and if we take that kind of mentality during a routine traffic stop, that's how there are people getting killed," he said.