Donald Trump showed all he can do is prowl and fume 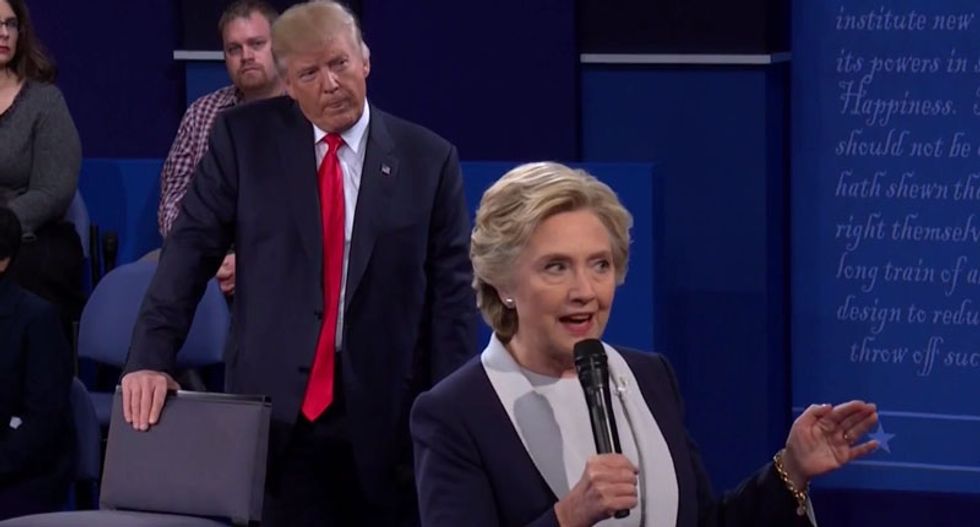 He paces. He prowls. He struts. His face is a mask pulled taut. His jaw is rigid from holding inside the rage that he knows he must keep locked up for the moment. Talk about body language.

The indignity of this situation, that a man of his prowess, but a man who would not exist but for cameras and microphones, should now have to stand still and shut up for whole minutes at a time!

The whole world has now seen and heard, on camera, what the star sounds like when he’s showing off in a Hollywood trailer, one alpha-male to a wannabe alpha-minus. To be abused — that is, revealed — by cameras and microphones! He’s the victim. And now forced to face off, on camera, against that deplorable woman, a whole basket all by herself!

She wants him caged. So do her so-called moderators — they should properly be called enablers. They want him contained, unfree. The animating energy of the caged beast will not be denied. Where he hangs out these days is no place so innocent as a locker room; it’s a cage. So he goes on the prowl.

First, the weekend’s circumstance is so embarrassing (“Access Hollywood” indeed!). He is a man who has always, before, been able to lie himself out of embarrassment. But now, face-to-face with the devil herself, he’s straitjacketed, forced to rein in his explosive emotions. For a star, standing still is torment.

And so, as this devilish woman speaks, he’s on the move behind her, nearby her, around her. He can’t stand still. Predators rarely do. But the rules of the game prevent him from going in for the kill.

For that, he’ll have to wait till he’s in the White House, when he’ll turn the tables and sendher into a cage.

The beast inside his soul is always straining to struggle loose. He can barely keep it contained. This is his Golgotha moment.

Women are meant to be inert. Women are supposed to be grabbed. Donald Trump is — or aspires to be — or thinks it is worth points to be seen as — the grabber-in-chief. But he is onstage now, and mutinies are in progress.

Sixteen years ago, in her first race for an open New York Senate seat, Hillary Clinton was in the middle of a sentence when she was approached onstage by another full-of-himself Republican debater, Congressman Rick Lazio. Talk about invading her personal space! Lazio loomed over her, waving a campaign finance pledge, shaking his finger in her face.

Trump may or may not realize how quickly Lazio crashed and burned. He is burning a small flame of self-control. So on October 9, 2016, all he can do is prowl. And fume. And fume.