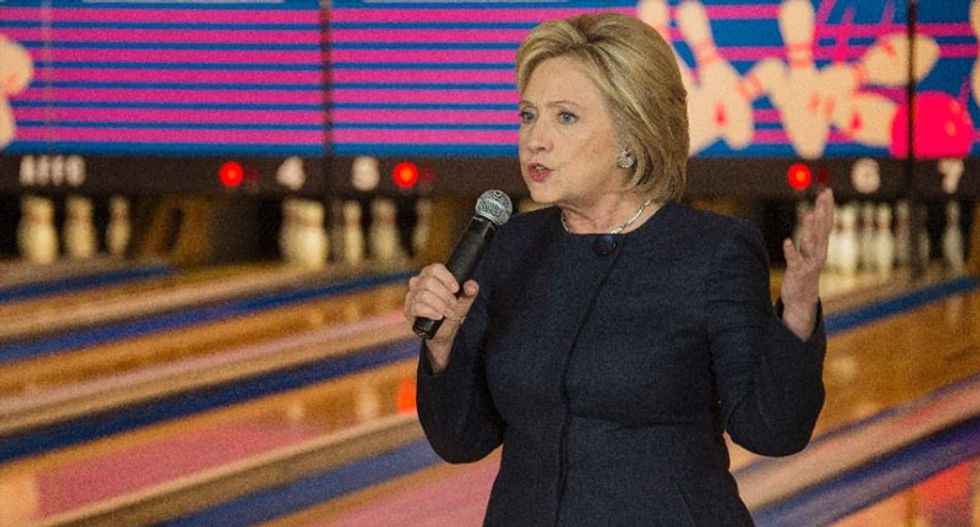 The other day, Hillary Clinton asked a union audience this question of questions: “Why aren’t I 50 points ahead?” Why indeed? She’s neither the first nor the last to ask. In recent days, I’ve heard the same words, the same incredulity, from a reporter and a retired historian from Paris, from professors and graduate students and the democracy-campaigning barrister Martin Lee in Hong Kong.

One layer of answer: working-class rage. With his incessant blasts of full-on belligerence, the tax-trimming, loophole-exploiting, Putin-romancing, offshoring Donald Trump voices a performance of rage more convincingly than his opponent, who is never quite free of taint for her association with NAFTA and, more recently, TPP. Beyond doubt, Trump has proved demagogically brilliant — if that is a word that can be placed in a sentence near his name — in exploiting working-class bitterness, never mind that he proposes a “plan” to raise their taxes even as he lowers his own and his pals’ way,way below zero. But white men in particular — and these days, many of them are not very particular — think that he might be the muscle they’re looking for.

Not that Trump’s supporters are necessarily the ones suffering most. As a fascinating study by Gallup’s Jonathan T. Rothwell showed over the summer:

[T]hose who view Trump favorably have not been disproportionately affected by foreign trade or immigration….[H]is supporters, on average, do not have lower incomes than other Americans, nor are they more likely to be unemployed.

To put it simply, it’s a class thing, not pure individual self-interest:

…while Trump’s supporters might be comparatively well off themselves, they come from places where their neighbors endure other forms of hardship. In their communities, white residents are dying younger, and it is harder for young people who grow up poor to get ahead.

The second layer of answer might be: working-class white male rage. Men are still more likely to draw their identity from work, and the erosion of prideful work kicks them in the gut, as does the rusting of cities. White resentment finds swarthy men to be convenient targets.

So there are two strengths for Trump — a bogus class appeal and an authentically racist one. Still, these two obvious, much commented-on forces cannot by themselves account for the fact that this race is even close to a race. Trump, after all, is demonstrably and regularly “unhinged,” as Clinton said the other day, with utmost precision, speaking specifically of his rants against Alicia Machado, the former Miss Universe whose sin, in his eyes, was to have put on a few pounds two decades ago — though Clinton might well have been speaking also of Trump’s other targets for insult and injury, like the Khan family.

So an observer from Mars might well think the majority of the electorate still cares enough for fair play and decency to have elevated Hillary Clinton into a double-digit lead over the man who doesn’t pay his taxes. So back to the question: Why isn’t she 50, or even 15, points ahead?

For months, the polls have answered: She’s untrustworthy, and in a vastly less entertaining way than her opponent. Look at her unfavorable numbers. So we arrive at the next layer of superficial answer, consisting of two words: 1. Benghazi. 2. Emails. Maybe there’s also a third and a fourth this week: 3-4: Gennifer Flowers.

But it’s not mistrust that can account for the hatred and sheer vileness directed Clinton’s way by Trump supporters and, for that matter, the larger Republican base as well. Her record might well inspire dislike; so might her manner, since it is evident that television does not love her. Why revulsion? Why “Hang that Bitch”? Sheer, unbridled Hillary Clinton-hatred has to be a big hunk of the answer.

Or put it in one word: misogyny.

Since Hillary Clinton entered national public life in 1992, she has inspired the most splenetic hatred. She was the feminist, careerist, Whitewater and cattle-future investor witch before she became the adultery expeditor. Consider, for example, the master of spleen himself, Rush Limbaugh — master, that is, at putting a smiley face on his loathing with a smirking joke or two. Long before anyone much had heard of Bill O’Reilly, Sean Hannity, Glenn Beck or the Breitbart-Bannon team, it wasLimbaugh, Mr. Backlash himself, who on his Dec. 4, 1992, TV broadcast defended his use of that charming term, “feminazi.” It means, he said, “a specific type of feminist. And so there’s no misunderstanding…there’re probably no more than 25 of them in the entire world….A feminazi is a feminist to whom the most important thing in the world is seeing to it that as many abortions as possible take place. A feminazi is a woman who gets mad when a pregnant woman is talked into giving birth.”

Also that year, Limbaugh made clear he was using his term precisely, because, after all, “the millions of abortions performed in the United States were comparable to a Holocaust.” He singled out, for example, Gloria Steinem, Anita Hill and Betty Friedan, among others. Why he didn’t mention Hillary Clinton by name at that point I do not know. He was sufficiently freaked out by her Senate campaign in 2000 to issue a radio broadcast helping to organize a demonstration against her in upstate New York. In any event, by 2015 he was bleating that the women of the DNC “want a cakewalk for Hillary. The women of the DNC are livid over what happened to Hillary in 2008 via Obama. They are livid over the way Hillary has been treated for the past 20 years. They think Hillary has single-handedly, by virtue of staying with Bill and supporting Bill, saved the Democrat Party.”

Limbaugh had, by this time, gone over the edge, blaming feminism for a shrinkage of penises. (You read it right.)

Which takes us to the present, where Limbaugh says about Alicia Machado:

[T]he Drive-By Media is happy to go sewer. They are happy to go tabloid. Anything they can do to protect Hillary. … If there’s a woman in this campaign that bullies other women and has been acclaimed for it, it is Hillary Clinton…. She is the feminazi.

Is Limbaugh old news, outshouted by Hannity, Beck, Alex Jones, Mark Levin and other radio whackos? It’shard to know how many listeners lap up Limbaugh’s bile, but even if his claim of 13 million listeners weekly is over the top, it’s still the case that, as Ethan Epstein put it in Politico, “The Rush Limbaugh Show is easily the most-listened to talk radio programin the country.”

My point is not that Limbaugh is uniquely potent as a battering ram against Clinton, although he’s been at it longer than most, blurting out loud what other blowhards learned they could also get away with blurting. My point is that Hillary Clinton has been demonized by the right and its media for a quarter-century now. She didn’t bake cookies, as she once said maladroitly. She stepped out of the conventional First Lady role — the first since Eleanor Roosevelt — to try reforming medical care as a sort of deputy president. “Buy one,” as Bill Clinton once said about his family, “get one free.” She represented American feminism at the 1995 United Nations Fourth World Congress on Women, declaring resoundingly that “women’s rights are human rights.” For such sins, in the eyes of freaked-out men, she is the ultimate uppity woman. In the eyes of a critical mass of Americans, two decades — two decades — of demonization have rendered her the female Antichrist.

Which is, to my mind, the single greatest reason why we are slogging through the slime of a single-digit race.