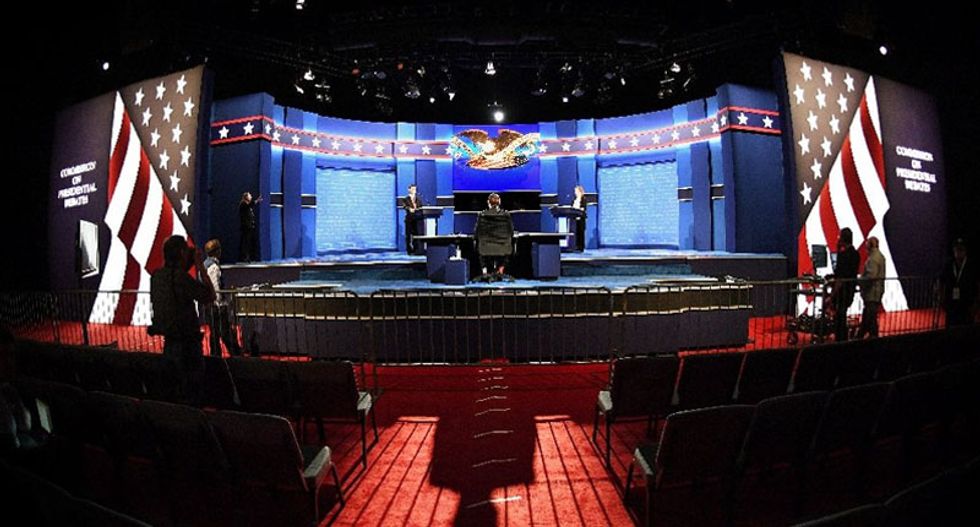 The venue for the last debate between Hillary Clinton and Donald Trump at the University of Nevada-Las Vegas on October 18, 2016 (AFP Photo/Mark Ralston)

Democrat Hillary Clinton and rival Donald Trump wade into their last presidential debate Wednesday with the Republican candidate spiraling downward in the polls amid allegations of sexual misconduct and wild charges of a "rigged" US election.

With less than three weeks to go before Americans cast ballots November 8, polls showed Clinton widening her lead over the Republican nominee.

The 90-minute debate at the University of Las Vegas, Nevada offers Trump what may be his last chance to turn around a campaign that has been battered by a stream of allegations he groped and forced himself on women.

"We've only just begun to fight, believe me," Trump said while campaigning in Grand Junction, Colorado Tuesday. "This is our final shot, folks."

Clinton has kept a low profile in recent days, shutting herself in with aides at a hotel near her home in Chappaqua, New York to prepare for the third televised debate of the campaign.

Both candidates on Tuesday jetted separately into this gambling and entertainment capital in the Nevada desert ahead of the high stakes encounter.

Moderated by Fox News journalist Chris Wallace, the event begins at 0100 GMT, before a televised audience expected to number in the millions.

The candidates will be asked about the debt and entitlements, immigration, the economy, the Supreme Court, foreign flashpoints and their fitness to be president.

The past two debates quickly degenerated into highly personal, mudslinging attacks that pushed substantive policy issues to the side.

Clinton "should do what she did in the two first debates which was largely remain calm, deflect criticism and attacks and let Donald Trump continue to self destruct," said John Hudak, a senior fellow at the Brookings Institution.

"If your opponent's ship is sinking you don't throw them a life preserver," he said.

Trump undoubtedly will draw on the lessons of the past two debates, and sharpen his attacks on Hillary over Syria and Libya.

The jihadist attack on the US diplomatic mission in Benghazi, Libya on September 11, 2012 remains a burning issue among Republicans, who hold the former secretary of state partially responsible for the deaths of four Americans, including the ambassador.

Trump has invited Patricia Smith, the mother of a communications expert killed in the attack, to attend the debate, according to Yahoo News. During the last debate, he invited four women, three of whom had accused former president Bill Clinton of sexual assault.

An average of recent national polls shows Clinton with about 46 percent support to 39 percent for Trump and 6.4 percent for Liberatarian candidate Gary Johnson.

Trump predicts an electoral surprise, or "new Brexit," on November 8.

But as he's lost ground, the New York billionaire has attacked the election process itself, complaining of a massive conspiracy to rig the elections against him.

"The press has created a rigged system and poisoned the minds of the voters," he said Tuesday.

"Either we win this election or we lose the country."

In a stinging rebuke, President Barack Obama on Tuesday told Trump to "stop whining" and go try to make his case to voters.

"I have never seen in my lifetime or in modern political history any presidential candidate trying to discredit the elections and the election process before votes have even taken place. It's unprecedented," Obama said, appearing with Italian Prime Minister Matteo Renzi in the White House Rose Garden.

"If, whenever things are going badly for you and you lose, you start blaming somebody else, then you don't have what it takes to be in this job," he added.

The White House is increasingly concerned that Trump and his supporters will not recognize the election's outcome, plunging the country into a political crisis.

According to a poll by Politico and Morning Consult, 41 percent of American voters, including 73 percent of Republicans, now believe the vote could actually be stolen from Trump.

But Clinton's campaign believes Trump's hot rhetoric has helped Democrats -- not only by galvanizing supporters but also shifting undecided voters to their camp.

"We know that he thought that strategy of scorched earth would depress our vote, but if anything, we have found that it's helped to motivate our voters," Clinton communication's director Jennifer Palmieri said.

Democrats are beginning to target traditionally Republican states in a bid to run up the score and help win legislative races that could decide who controls Congress.

On Thursday, First Lady Michelle Obama will campaign in Arizona, which has not voted Democratic since Bill Clinton's landslide win against Bob Dole in 1996.