Hillary Clinton looks to consolidate her lead over Trump 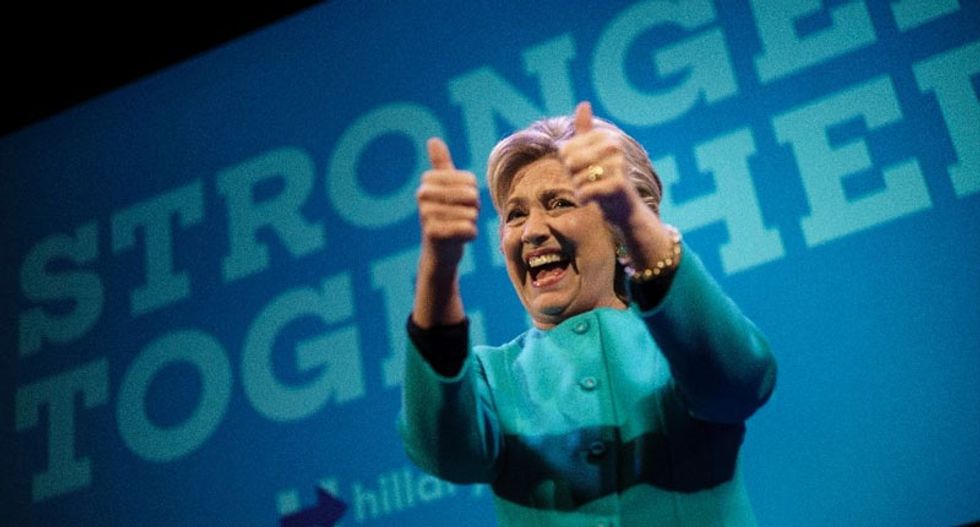 With just over two weeks to go before Americans vote for a new president, Hillary Clinton -- who has widened her lead over Donald Trump -- is stepping up her efforts in key battleground states to consolidate her lead.

The Democratic former secretary of state vying to become America's first female president leads the Republican real estate mogul among likely voters by 50 percent to 38 percent, according to a national ABC News poll.

That is her highest score since the start of the race to succeed Barack Obama in the White House.

"We are behind," Trump's campaign manager Kellyanne Conway admitted Sunday on NBC's "Meet the Press," nevertheless insisting that the race was not over.

At an evening rally in Naples, Florida, the 70-year-old Trump called on his supporters to turn out en masse to "get rid of Crooked Hillary once and for all," using one of his favorite nicknames for his 68-year-old rival.

"Numbers are looking phenomenal in Florida. Don't believe the media," he insisted.

The Sunshine State is a key prize in the presidential race, one of several battleground states that are key for both candidates if they want to win on November 8. Most polls put Trump a few points behind Clinton there.

Conscious that winning the minority vote will help lead her to victory, the 68-year-old Clinton started her day Sunday at a mainly black church in Durham, North Carolina -- another of the swing states up for grabs.

Obama won the southern state by a razor-thin margin in 2008, but lost it to Mitt Romney four years later. Team Clinton is pulling out all the stops to put it back in the Democratic win column.

Before a congregation that included Sybrina Fulton -- the mother of slain unarmed black teen Trayvon Martin, whose death shocked America in 2012 -- Clinton called for awareness of the "systemic racism" seen across the country.

"These conversations can be painful for everybody, but we have got to have them."

She accused her Republican opponent of painting "a bleak picture of our inner cities" and ignoring the successes of black leaders "in every field and every walk of life."

Clinton will return to North Carolina on Thursday with the woman who has emerged as one of her best campaign weapons -- Michelle Obama. It will be their first joint rally for the former and current first ladies.

"The choice in this election really is about what you want, what you believe for yourself and your future," Clinton told a rally in Charlotte, notably mentioning the need to respect women -- an allusion to Trump's woes over allegations of sexual misconduct.

The new ABC News poll said 69 percent of likely voters disapprove of Trump's response to questions about his treatment of women, after a series of women alleged he either groped or forcibly kissed them in years past.

Trump has strongly denied those allegations, and on Saturday threatened to sue the "liars" who came forward with claims about his past behavior.

Clinton is leading nationally in both two-way and four-way contests by an average of about six points, according to RealClearPolitics. She is also ahead in most of the crucial battleground states.

The 70-year-old Trump is clinging to an edge -- but only a slight one -- in traditionally Republican strongholds like Texas, where he has a three-point lead.

Team Clinton is gunning for a landslide win, using its momentum to push ahead in the battle for control of Congress. Both the Senate and the House of Representatives are now in Republican hands, and the Democrats would like to change that.

"We're not taking anything for granted at all," campaign manager Robby Mook told "Fox News Sunday."

While Clinton has received several major newspaper endorsements, Trump got his first major thumbs-up, from the Las Vegas Review-Journal.

"Mr Trump represents neither the danger his critics claim nor the magic elixir many of his supporters crave," the paper wrote, adding he would instead shake up the US capital's "political elites."

For the president, Democrats have the winning hand.

"You've got an ace, and you've got a jack," he said, giving in to the urge to use a blackjack metaphor in Sin City.

"But you've got to make sure to turn over the card by voting," he added.

"The game ends on November 8th!"