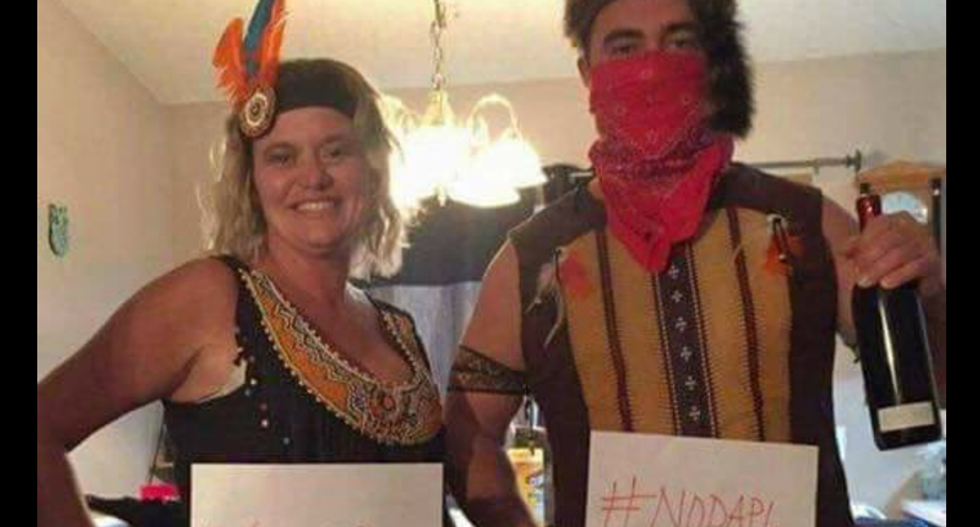 For months, environmentalists and Native American tribes have fought tooth and nail against the DAPL because it will be built on Native burial lands. Much like the farmers and ranchers in Nebraska who fought the Keystone XL pipeline, this land would be acquired through eminent domain by the government. The tribes are stand up against a hostile takeover and hundreds have been protesting. Other Native Americans from tribes all over the country have rushed to North Dakota to try and help, including an Oklahoma Caddo Nation tribal leader last week. Friday, over 100 were arrested during a violent clash with police where protesters were beaten and allegedly detained in dog kennels.

All of these serious incidents are nothing but a joke to some, however. According to photos discovered by Fusion, some are harnessing cultural appropriation by wearing their hair in braids with headdresses and feathers while holding #NoDAPL signs.

"Our #NoDAPL fight isn't a joke," Dr. Adrienne Keene, who runs the website, Native Appropriations, tweeted. "Literally two days ago unarmed protectors were being beaten, shot, pepper sprayed, & arrested. All to protect the water and land. And their fight, pain, and sacrifice is made into a joke."

This isn't the first Halloween for culturally insensitive costumes. Some whites are wearing blackface to create sickening Black Lives Matter costumes and others as Mexicans to become Trump's Mexican rapists or even Olympic track costumes for men who want to be Bruce Jenner.

As word spread about the costumes, some fought the racism by making donations to help those fighting the cause. Hillary Duff made news this weekend when she dressed as a Pilgrim along with boyfriend Jason Walsh who wore a Native American costume, literally in redface.

Check out some of the disgusting costumes below: