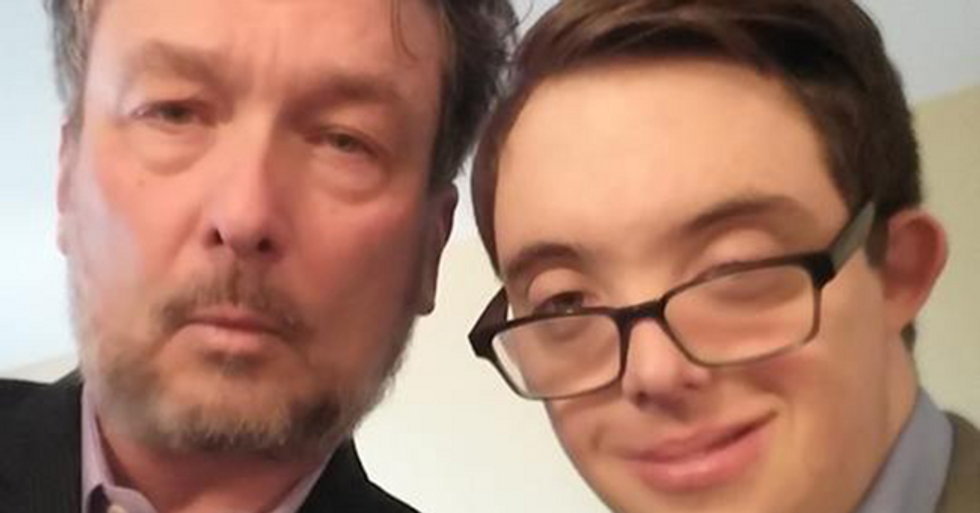 Michael Bérubé with his son Jamie

I have no regrets about having Jamie; quite the contrary—I am thankful for his presence in my life every single day. But at one point in our lives together, I did feel a pang of regret about the way I was raising him. It was at the 2005 conference of the Canadian Down Syndrome Society, and one of the keynote speakers was talking about how and why we need to attend to the “spiritual development” of children and young adults with Down syndrome. One of her examples involved bringing a young man with Down syndrome to the cemetery in which his grandparents were buried, so that he could come to terms with their death.

I caught my breath. Jamie’s maternal grandfather, Bradford Lyon (known to his four grandchildren as “Duke”), had died the previous autumn, and Jamie had watched attentively as Janet grieved through Duke’s final year. He had also comforted Janet’s sister Cynthia as she sobbed through the funeral service. But I had not spoken to Jamie about Duke since his death; I had done what I could to prepare him for the fact that his beloved grandfather, with whom he got on so famously from infancy to tweendom, would no longer be with us. In the seven months between the funeral and the conference, though, I had not brought it up. Jamie very clearly took his grandfather’s death hard, and I did not want to make things any harder for him. He and Duke were exceptionally close, as Jamie’s response to this fifth-grade writing assignment can attest (he composed it with the help of his teachers):

If my parents went on a trip, I would like my grandfather to stay with me. We could go to the movies and eat pizza. We could go out to lots of restaurants. He could take me swimming and we could go shopping. We could go to Lowe’s and buy Christmas gifts. We could go to Target and buy socks and underwear. We could shop at Best Buy and get videos. After we are done eating and shopping, we could go to see the fish at the Hub at Penn State. He could also take me to the playground.

To that point in his life, Jamie had never experienced the death of a family member. Then, too, there is the fact that I do not often speak or think of our “spiritual” development. I do not often speak or think of spiritual anything. I am a devout agnostic, though reasonably literate in Catholic intellectual and religious traditions, and I fear that if I say the word “spiritual” my tongue will cleave to the roof of my mouth and Moloch will burn my body with the fire of a thousand incandescent coals.

So at some point during the conference, I asked him. He did not want to talk about it.

Later that summer, he wanted to talk about it. Without warning, without context. We were in the men’s locker room at a public pool a few blocks from our house (and why have so many of our heart-to-heart talks taken place after swimming? Is there something about swimming that is tied to Jamie’s spiritual development?), and as we dried off and put on our clothes, Jamie said, “you know ... maybe Duke could come back.”

I fought back tears. “Oh, oh, Jamie,” I said. “That’s the hard part. That’s what everyone has so much trouble with. We don’t know what happens after people die, but we do know that the people don’t come back. It really is final, for once and for all. And that is why we have religion, and beliefs about god and the universe– to help us deal with the fact that the people we love die and don’t come back, and that every living creature dies and doesn’t come back. I hope you can understand this. I hope you are not waiting for Duke to come back. He can’t come back, Jamie. I am sorry. I am so, so sorry.”

Jamie waited patiently through this little disquisition on mortality. Today, I like to think of him tapping his foot and whistling, but I know he did no such thing. He was just waiting quietly for his father to stop talking. And when I stopped talking, Jamie put his hand on my shoulder, tilted his head, and gently said, “Michael. I said maybe.”

I’m not sure how I retained my composure, but I had the presence of mind to remember that Jamie and I had just made our way through the scene in Harry Potter and the Half-Blood Prince in which Harry and Dumbledore encounter the Inferi, dead bodies reanimated by dark magic.

“Are you thinking of the Inferi?” I asked. Jamie nodded.

“Oh no, Jamie, that’s not something you would want. You would not want Duke to come back like that.”

“Or like zombies,” Jamie replied, totally getting the point.

“Or like zombies. Yes. Because zombies are just dead bodies with no spirit”– I said the word! and I was not smitten!– “like ghosts are spirits with no bodies. Jamie, we make up stories about ghosts and zombies because we do not know what happens after we die. But you would not want Duke to come back as a zombie.”

Suddenly I realized how to revive a cliché– if not a dead body. Duke lives in our memories. “Duke had a very lively spirit, Jamie,” I said. Jamie nodded again. “And you have his spirit too.”

Jamie laughed. This is, in fact, a completely accurate description of Bradford Lyon.

“And that is why you two loved each other so much. You have the same spirit. So in a way, Duke’s spirit lives in you.”

Jamie straightened up. It was almost as if I had promoted him to colonel. “It does?”

“It does. And of course we will always remember him, and as long as we remember Duke, his spirit is alive in our hearts.”

Jamie nodded emphatically. It was an impromptu sermon in a men’s locker room at a local pool, but it was the best I could do.

It is a truism, among people who love and care for humans with intellectual disabilities, that our interactions with people with intellectual disabilities lead us to startling and valuable perspectives on the meaning of our lives as humans. That truism is a truism because it happens to be true. But it has some profound and unsettling corollaries for everything else we think we know. One of them is this: a capacious and supple sense of what it is to be human is better than a narrow and partial sense of what it is to be human, and the more participants we as a species can incorporate into the determination of what it means to be human, the greater the chances that we will enhance our collective capacities to recognize each other as humans entitled to human dignity– and the greater the chances that we will devise an adequate understanding of our profound interdependence with the nonhuman world, as well. As Jamie has reminded me time and again throughout his life, most Americans had no idea what people with Down syndrome could achieve until we'd passed and implemented and interpreted and reinterpreted a law entitling them all to a free appropriate public education in the least restrictive environment. With the help of that law, as well as with the help of his teachers and aides and family members and animal companions, Jamie got to the point at which he could meditate on life and death with the rest of us.

I know it sounds unlikely. It might even sound impossible. But I said maybe.

Excerpted from Life as Jamie Knows It: An Exceptional Child Grows Up by Michael Berube (Beacon Press, 2016). Reprinted with permission from Beacon Press.

Michael Bérubé is Edwin Erle Sparks Professor of Literature and Director of the Institute for the Arts and Humanities at Pennsylvania State University. He is the author of ten books to date, including Public Access:  Literary Theory and American Cultural Politics (Verso, 1994); Life As We Know It:  A Father, A Family, and an Exceptional Child (Pantheon, 1996; paper, Vintage, 1998); and What’s Liberal About the Liberal Arts?  Classroom Politics and “ Bias” in Higher Education (W. W. Norton, 2006).

Life as We Know It was a New York Times Notable Book of the Year for 1996 and was chosen as one of the best books of the year (on a list of seven) by Maureen Corrigan of National Public Radio.

A lawsuit was filed this Monday against a former Texas police officer, accusing him of running over an unarmed man during a foot pursuit in November of 2020, the Fort Worth Star-Telegram reports.

Dash cam video shows former Lake Worth police officer Jonathan Granado striking Dustin Bates with his vehicle, causing him to suffer three fractured ribs, a broken right leg and a fractured spine. Bates was later charged with evading arrest and drug possession, but the charges were dismissed in August at prosecutorial discretion. Granado resigned from the department in December of last year.