‘I could sue you’: CNN’s Angela Rye torches Katrina Pierson for telling a massive lie about her 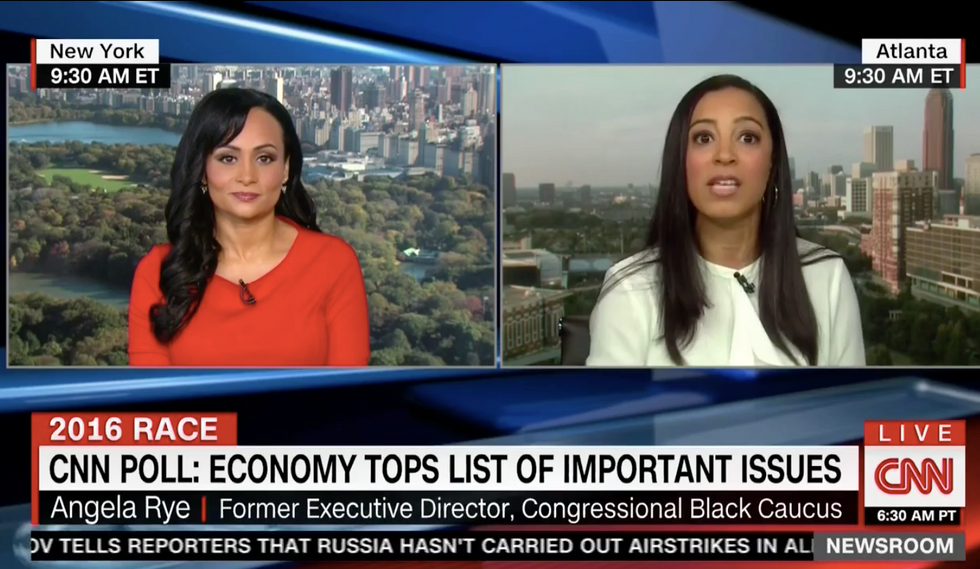 CNN commentator and Democratic political strategist Angela Rye mopped the floor with Trump spokeswoman Katrina Pierson on Friday morning, beating back Pierson's attempt to attack her personally and call her record with the Congressional Black Caucus into question.

In a heated back-and-forth, Pierson said that the middle class in the U.S. is in trouble due to the economic policies of the Obama administration.

Rye countered with real numbers, saying, "I would like to go back to something Katrina mentioned, which was the middle class is hurting. Well I would go to what we've learned from the census bureau last year which is the middle class, and poor people, had the best year they've had ever since -- in 2015. In quite some time rather. I won't say ever. It says that real median household income was $56,500 in 2015. That is an increase from $53,700 the year prior. I would also point to you the fact that the unemployment rate is much lower than when President Obama started."

Anchor Carol Costello played a clip of Republican nominee Donald Trump talking about how black Americans live in "ghettos" in constant fear for their lives.

Rye said that it's important to bear in mind that there is "an access to capital issue" in this country. "People like Donald Trump actually take for granted the fact that they have readily available access to capital."

When Pierson began to sputter in protest, Rye said, "I know you don't want to hear this because the truth burns."

Things got heated, however, when Pierson attacked Rye's record with the Congressional Black Caucus, which Pierson said Rye "ran into the ground."

"I ran the CBC into the ground?" said Rye. "That's laughable."

"Katrina, what are you talking about?" asked Costello.

"The record is out there," Pierson said. "Look at where the finances were."

"Carol, can I please respond to the personal attack at this point?" Rye asked.

"Let me just help you," Rye said to Pierson. "Good luck with that lie."

Rye explained her work with the CBC and multiple jobs programs, then said of Pierson's remarks, "That's crazy, what you're talking about. That's slander. I could sue you, Katrina."