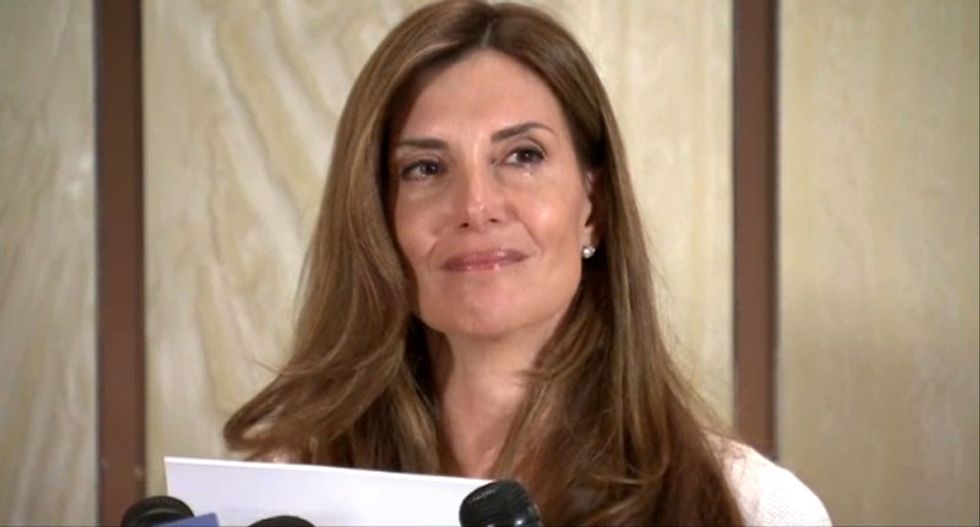 Carena Virginia, who is accusing Donald Trump of sexually assaulting her by grabbing her breast (Screen cap).

As expected, attorney Gloria Allred on Thursday revealed that yet another woman is accusing Donald Trump of sexual misconduct.

In a press conference at the London Hotel in Manhattan, Allred presented Karena Virginia, who alleges that Trump groped her in 1998.

"No one has asked me to come forward," she said. "Many people advised me not to speak publicly about what Donald Trump has done to me... Perhaps he will label me another 'nasty woman.'"

She said the incident took place while she was at the U.S. Open tennis tournament in New York and waiting for a car to bring her home. She said that Trump then approached her and said to men whom he was with, "Hey look at this one, we haven't seen her before. Look at those legs."

He then allegedly grabbed her right arm and then touched the inside of one of her breasts.

"Don't you know who I am?" he asked her after she flinched at his advances.

“I felt intimidated and I felt powerless," she said.

She then said her ride picked her up and she was able to escape Trump's clutches. She then went on to explain how ashamed she felt afterward, and said she stopped wearing short dresses afterward, as she worried that they would attract more men who would grope her.

"Your moment of pleasure came at my expense," Virginia said of Trump.

Allred said that, despite her past experiences with Trump, Virginia isn't pursuing a lawsuit against him at this time.