In battleground Florida, tough stance on felons may sap votes for Democrats 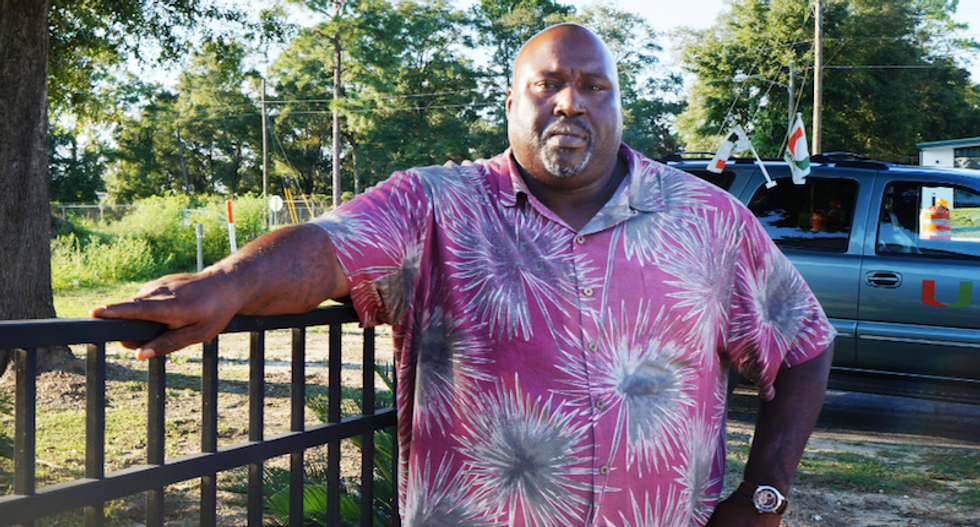 Leonard "Roscoe" Newton has been in and out of Florida's prisons since before he could vote, starting with a youthful conviction for burglary.

He's been a free man for six years now with an important exception: he still can't vote.

Newton, who is African-American, is among nearly 1.5 million former felons who have been stripped of their right to vote in a state with a history of deciding U.S. presidential elections, sometimes by razor-thin margins of just a few hundred votes.

Felons have been disenfranchised in Florida since 1868, although they can seek clemency to restore their voting rights.

Since 2011, however, when Republican state leaders toughened the restrictions on felon voting rights, just 2,339 ex-felons have had that right restored, the lowest annual numbers in nearly two decades, according to state data reviewed by Reuters.

That compares with more than 155,000 in the prior four years under reforms introduced by Governor Rick Scott's predecessor, moderate Republican governor Charlie Crist, the data shows. Crist, who was governor from 2007 to 2011, made it much easier to restore ex-felons' voting rights.

"When I tried to be an effective member of the community, I saw that I was voiceless," said Newton, whose expectations of getting his rights restored were dashed when the rules changed under a new administration. "I'm 45, and I have never voted."

The dramatic slowdown has stoked a racially charged debate over whether political bias taints the process of restoring felon voting rights in the largest battleground state in the Nov. 8 presidential election.

"Republicans oppose the felon vote change because they are concerned about the political implications," said Darryl Paulson, a conservative Republican voting rights expert who sees wide restoration of voting rights as "a huge political advantage for the Democratic Party." Paulson says non-violent ex-felons should have the right to vote.

Almost all U.S. states deny incarcerated felons the right to vote but many restore those rights after they have completed their sentences.

Over the last two decades, more than 20 states have taken action to help people with criminal convictions regain their voting rights. Since July, Virginia's governor has restored voting rights to 67,000 felons.

Florida is the largest of four remaining states that strip all former felons of voting rights, accounting for nearly half of those barred from voting nationally. Along with Virginia, the others are Kentucky and Iowa.

In March 2011, two months after he became governor, Scott reversed Crist's reforms, which had allowed many non-violent felons to automatically get their voting rights reinstated after they had completed their sentences. Crist had also simplified the process for felons convicted of more serious crimes to regain their votes.

Scott, a millionaire former health care executive, put in place new restrictions, requiring ex-felons to wait for five to seven years before applying to regain the right to vote, serve on a jury or hold elected office. He said the new rules ensured ex-felons had proven they were unlikely to offend.

Florida has disenfranchised about one in five voting-age black voters, according to research collected by the Sentencing Project, a Washington-based advocacy group.

That compares with about 8.6 percent of the state's non-black potential voters. Data on the Hispanic voting-age population who can't vote because of the law was unavailable, although Hispanics make up 12.5 percent of Florida’s inmates.

The rates reflect racial disparities in criminal convictions. Florida's current prison population is nearly 48 percent black, more than any other racial group, although blacks are only 17 percent of the state's population.

Ion Sancho, supervisor of elections in Leon County, which includes the capital city of Tallahassee, accused the Republican administration of repealing the felon voting reforms "to reduce the number of African Americans who had their rights restored because those voters were perceived to be more Democratic voting and so therefore were targeted for elimination."

Sancho is a former Democrat who is now unaffiliated with either party.

Scott and Attorney General Pam Bondi, the Republican officials who drove the 2011 policy changes, did not agree to be interviewed by Reuters or respond directly to questions on the accusations that the law is intended to influence elections. But Bondi has previously denied the policy amounts to racially motivated disenfranchisement.

Scott's office, in a statement to Reuters, said former felons need to "demonstrate that they can live a life free of crime, show a willingness to request to have their rights restored and show restitution to the victims of their crimes" in order to have their voting rights restored.

Democrats have seized on the issue as a civil rights concern, regardless of the political impact, said Nell Toensmann, who chairs the Democratic Party of St. Johns County, a north Florida region of about 225,000 people dominated by Republicans.

"Yes, it does disenfranchise a lot of African Americans, but it disenfranchises a lot of white people who would be voting as Republicans as well," she said.

The Reuters/Ipsos States of the Nation polling project shows a tight race in Florida. It estimates that Democratic presidential candidate Hillary Clinton has a 48 percent chance of winning the state, compared to her Republican opponent Donald Trump's 42 percent.

Political scientists say the voting ban can sap votes from both parties, but some research suggests that Democrats pay a steeper price.

An analysis of voting patterns by race and economic status found that if the ban had not existed during the 2000 presidential election, Democrats would have had enough votes to overturn Republican George W. Bush's 537-vote victory in Florida that won him the White House.

"In very close elections won by Republican candidates, felon disenfranchisement could be decisive," said Christopher Uggen, a University of Minnesota professor who led the study.

Applying for voting rights can be difficult. Ex-felons must submit certified court documentation of each felony conviction — documents that can be difficult to secure for those unable to spend time and money tracking down records in courthouses.

Cases involving serious crimes are heard in person by a clemency board consisting of the governor and Florida's cabinet officers, in quarterly meetings in Tallahassee.

During a Sept. 21 meeting in a windowless room in the Florida Capitol building, 48 petitions to restore voting rights were on the agenda presented to the governor and three state officers in an all-day session punctuated by tears and emotional pleas. Some petitioners were represented by attorneys, others showed up solo or accompanied by a friend or relative.

"Clemency is an act of mercy. There is no right or guarantee," Scott told them, urging applicants to accept culpability.

State rules give him the deciding vote.

Learlean Rahming approached the podium in a black and white flowered dress, accompanied by her adult daughter. State records show dozens of criminal charges over two decades that include larceny, drug possession and shoplifting.

"I accept my responsibility for all of my stupid mistakes of the past," said the 63-year-old woman, who had traveled from Miami, adding that she has been out of prison for more than 20 years.

Officials were impressed by her turnaround story, until Bondi noticed a discrepancy. Records showed Rahming had voted under a married name after her release. "Just to see if I could vote," she told the panel, explaining that for many years she had not realized that her rights were taken away.

The board ultimately cleared 23 residents to get back their civil rights.

More than 10,500 applications are still pending.

Crist, the former governor who championed leniency, switched to the Democratic Party in 2012. In an interview, he questioned whether the policy changes on felons voting cost him a 2014 bid to reclaim the governor's mansion.

He lost by about 64,000 votes - in the ballpark of the number of people in the state who complete felony sentences in a typical year, Florida Department of Corrections data shows.

"We will never know for sure," Crist said.