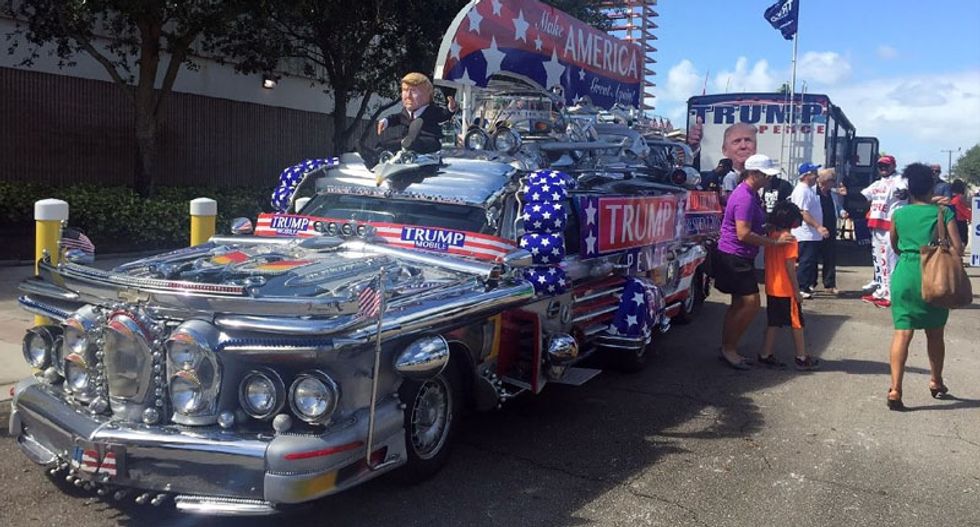 Supporters of US Republican presidential nominee Donald Trump gather next to a vehicle before a rally in West Palm Beach, Florida on October 13, 2016 (AFP Photo/Leila Macor)

A group of volunteers registering Hispanic voters gets down to business at an apartment complex in the center of Florida, one of the key battleground states in the White House race.

The bad news for Republicans is that most of those waiting to sign up before Tuesday's deadline are Puerto Ricans.

Since the 2012 election, the dire financial crisis in Puerto Rico has brought hundreds of thousands of new residents from the US commonwealth in the Caribbean to Florida.

They strongly support Hillary Clinton and could deliver the Sunshine State to the Democratic candidate.

Ana Iris Vazquez, a 54-year-old housewife, is preparing lunch in her Orlando apartment when two women knock on her door. They work for Mi Familia Vota (My Family Votes), an NGO seeking to register Hispanics eligible to vote.

"For Hillary!" Vazquez exclaims when asked who she will vote for on November 8. "If I voted for this man (Trump), we'd all be screwed," she says with a smile, referring to Republican nominee Donald Trump.

When she left her home island, Vazquez and her fellow new "Flo-Ricans" never thought they could have the power to decide the fate of the US presidential race.

But one million Hispanics have come to this state since 2012, most of them Puerto Ricans. Many have settled in the Orlando area -- home to Disney World and other theme parks.

"The migration of Puerto Ricans has really made a huge impact on the number of Hispanics registered to vote in central Florida," says Mark Hugo Lopez, director of the Pew Hispanic Research Center.

Puerto Ricans are US citizens and are eligible to vote in the US mainland -- unlike foreign immigrants, who must first become citizens, a process that can take years.

The 1.9 million Hispanics currently registered to vote in Florida represent 15.4 percent of the state's electorate.

According to Pew, between 2006 and 2016, the number of registered Hispanics increased 61 percent. Most of them are Democrats.

At the Mi Familia Vota office in Orlando, a dozen volunteers are preparing to register voters in supermarkets and homes. Hand-colored signs glued to the wall chart the 28,200 Hispanics that the group has registered so far.

"Wherever the Puerto Rican voting trend goes is where you will see the Hispanic vote go" in Florida, said Soraya Marquez, the group's state director.

Historically, elections in Florida have been extremely close between Republicans and Democrats. In 2000, Republican George W. Bush won the state -- and the presidency -- with a 537-vote margin over Democrat Al Gore.

For decades, every Republican elected president has carried Florida. The last one who won without the southeastern US state was Calvin Coolidge in 1923.

That explains why both candidates have so fiercely courted Florida voters in the campaign's home stretch. With 20.2 million people (24.5 percent of them Hispanic), Florida is the third most populous US state.

But more important than its size is Florida's swing state status -- from election to election, it tends to alternate between the two major parties and by an extremely small margin.

Florida is complex electorally because it is anything but homogeneous.

The south leans Democratic, the north leans Republican, and the center is a close race that's widening because of Puerto Rican migration. It is this election's real battlefield.

"Anything can happen because the state is very evenly divided," says Kevin Hill, an associate professor of politics and international relations at Florida International University.

According to the latest Real Clear Politics poll averages, Clinton is 6.4 percentage points ahead of Trump nationwide, but in Florida the margin is 3.6 points.

Trump has earned the antipathy of Latinos, especially Mexicans whom he has called "criminals" and "rapists" while promising to build a giant wall on the US-Mexican border.

"That man discriminates against us, he denigrates us. What on earth would happen to us with that guy. And the way he talks!" says Vazquez, stirring meat for tacos.

According to a Pew poll released on October 11, nearly six out of ten Latinos registered to vote in the country (58 percent) support Clinton, while 19 percent support Trump.

Mi Familia Vota is also focusing on getting a high turnout.

Though it is officially nonpartisan, the group defends immigrants' rights.

"We are going to knock on door after door, of the people who registered with us, to urge them to turn out," Marquez says.

"In other words: they won't be able to hide," she says with a laugh.