In last debate, Clinton and Trump battle over Russia's Putin 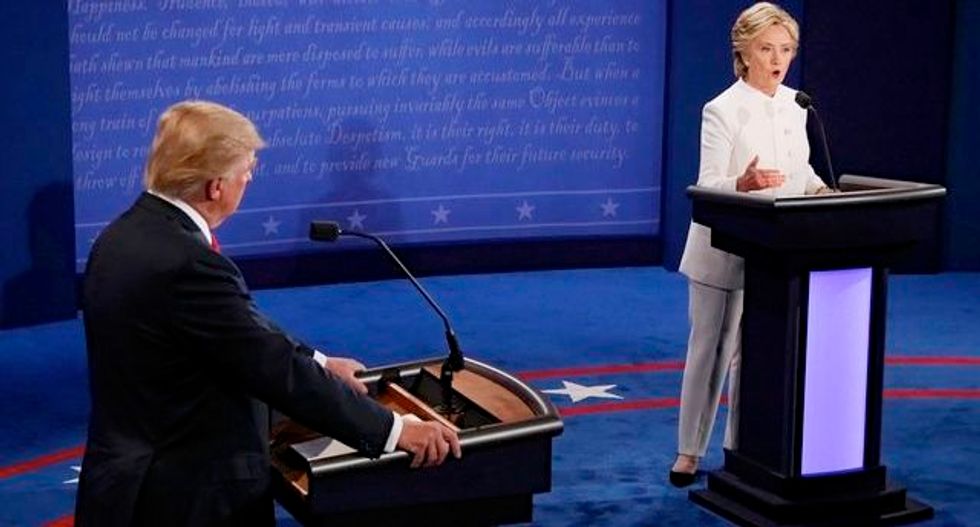 In a third and final U.S. presidential debate that focused more on substantive policy issues than the personal attacks of the first two debates, Clinton said Trump had refused to condemn Putin and Russia for recent cyber attacks.

"He'd rather believe Vladimir Putin than the military and civilian intelligence officials that are sworn to protect us," Clinton said.

U.S. intelligence agencies and the Department of Homeland Security have said the Russian leadership was responsible for recent cyber attacks on the Democratic National Committee and the leaking of stolen emails.

Trump rejected the idea that he was close with Putin, but suggested he would have a better relationship with Russia’s leader than Clinton.

Clinton responded: ”Well that's because he'd rather have a puppet as president of the United States.”

"No, you're the puppet," Trump retorted. "Putin has outsmarted her and Obama every single step of the way," he said in a reference to U.S. President Barack Obama, a Democrat like Clinton.

Clinton also said Trump had been "cavalier" about nuclear weapons and should not be trusted with the nuclear codes.

The two presidential rivals had tough but issues-based exchanges on abortion, gun rights and immigration during the 90-minute showdown.

Trump seeks to reverse his fading momentum in a U.S. election that opinion polls show is tilting away from him. The New York businessman, 70, has been damaged by several accusations he groped women - which he denies - and concerns about his claims the election will be rigged against him.

Under current law, Trump said, "You can take the baby and rip the baby out of the womb of the mother just prior to the birth of the baby."

"Honestly, nobody has business doing what I just said, doing that as late as one or two or three or four days prior to birth," Trump said.

"This is one of the worst possible choices that any woman and her family has to make and I do not believe the government should be making it," Clinton said.

Trump said he would appoint a Supreme Court justice who would protect American gun rights.

He has said in the past that Clinton wants to “essentially abolish” the Second Amendment of the U.S. Constitution guaranteeing a right to bear arms.

Clinton said she supports gun rights, but wants additional regulations on guns, citing examples of children being hurt or killed in gun accidents. “I see no conflict between saving people’s lives and defending the Second Amendment.”

Clinton and Trump walked straight to their podiums when they were introduced at the University of Nevada, Las Vegas, forgoing the traditional handshake as they did at the second debate last week in St. Louis, Missouri.

The debate gave Trump, making his first run for elected office, perhaps his best remaining chance to sway the dwindling number of Americans who are still undecided about their vote in the Nov. 8 election.

Clinton, a former secretary of state, U.S. senator and first lady, leads in national polls and in most of the battleground states where the election will likely be decided. The debate was her opportunity to make a closing argument on why she is best suited to succeed Obama.

Trump's White House bid has been marked by personal squabbles and controversial comments about immigration and minorities. Most recently, he has urged supporters to patrol polling places in inner cities to prevent voter fraud, and tried to fight off several allegations that he groped women.

Clinton has struggled to get past concerns about transparency raised over her use of a private email server for work communication while she was secretary of state from 2009 to 2013.