Will Godfrey, The Influence 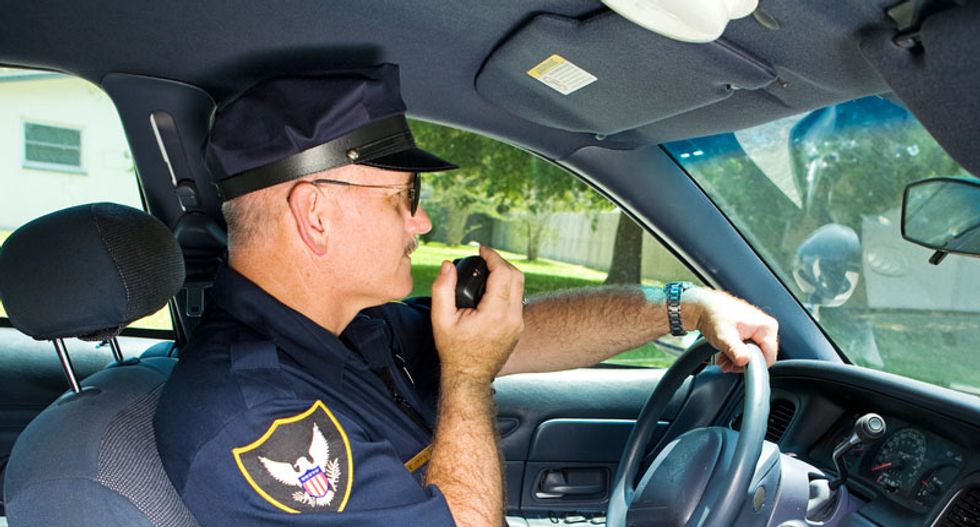 A police officer in his patrol car (Shutterstock)

Cops in Hope, Indiana have self-righteously released and publicized a photograph of a young mother passed out in a car in a Dollar General parking lot. She had apparently used heroin, and had a syringe in her hand and her 10-month-old son in the back seat.

The woman, whose name and image we won’t be sharing, was revived with naloxone and booked on charges of child neglect and possession of drug paraphernalia.

Hope Marshal Matthew Tallent has conducted a round of media interviews with the Indianapolis Star and some local TV stations to capitalize on the attention this has earned his department. And whether his justifications are cynical or merely ignorant, they’re plain wrong.

“This is becoming a new norm for drug users,” he said.

That’s highly questionable. Drug use has mixed with parenting for as long as there have been parents, and a handful of recent publicized instances—such as an example provided by cops in Ohio last month—does not a trend make.

What is notable, however, is the increased willingness of police departments to publicly shame parents who are caught under the influence of heroin—and of media outlets, including many national ones in this case, to happily cooperate in piling on the stigma.

“Parents are doing this more often with children in the car because they are doing it away from someone who is going to disapprove,” said Tallent—unconsciously demonstrating that the criminalization and stigmatized status of heroin and other drugs causes people who use them to do so in ways that place themselves and their children at increased risk.

Some would argue here that parents not using drugs would mean removing this risk—to which the counterpoint is that the US has devoted vast resources to making people not use drugs for many decades, and use them many still do. Any responsible policy acknowledges the reality of widespread continuing drug use and seeks to mitigate associated harms.

“My intention with these photos is not to shame the mother, although I realize it may appear embarrassing,” said Tallent, with understated hypocrisy. “I honestly think this picture should be used as an educational tool because I want people to see what this drug is doing.”

How essential it is to use this young woman’s personal plight to counter all of those heroin-positive stories plastered across the media these days.

“It’s shocking,” Tallent told yet another media outlet. “When you look at something like that you see your own children.”

No one, anywhere, would suggest that a parent being unconscious through drug use while in charge of a baby is a good or safe state of affairs. But anyone with a shred of common sense could infer that for a parent to be in this position, their life likely includes significant turmoil and pain—and that national-scale humiliation is far more likely to add to that, with a corresponding negative impact on the child’s life, than to solve it.