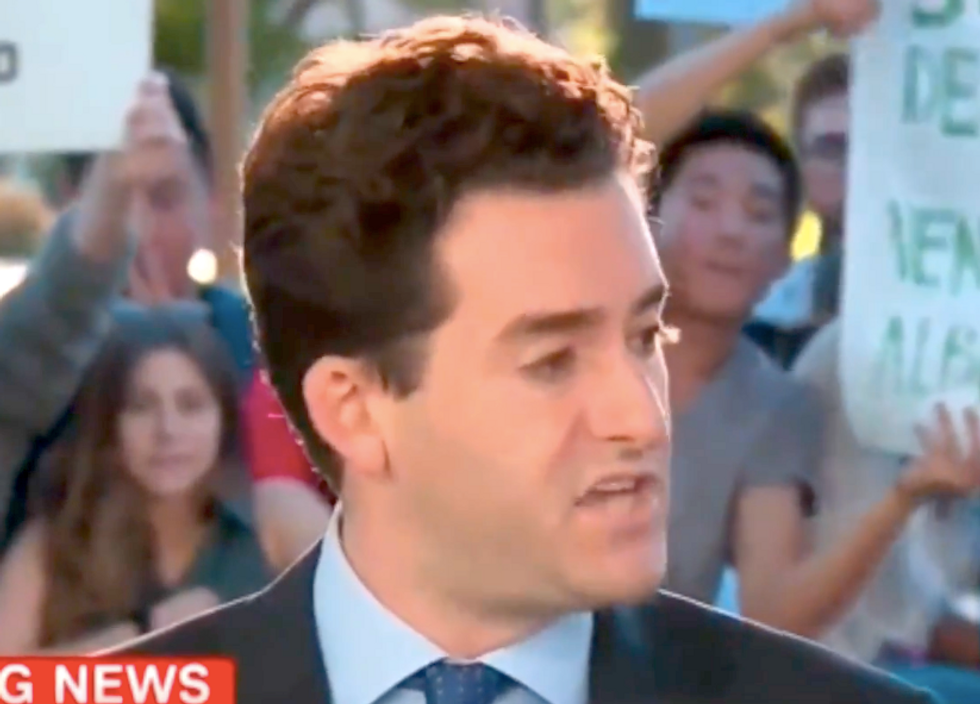 On Saturday afternoon's edition of CNN Newsroom, host Poppy Harlow pinned down Trump supporter Andy Dean on his boss's use of disgusting language in a 2005 video where the Republican presidential candidate boasted about sexually assaulting women.

Dean was trying to insist that Democratic presidential nominee Hillary Clinton cannot portray herself as a champion of women because the Clinton Foundation accepts "millions of dollars from middle eastern countries where women are horribly abused."

"Are you making an equivalency what the Clinton Foundation takes for donations to in some way excusing what Donald Trump said?" Harlow asked, referring to the lewd and disgusting remarks the Republican nominee made in 2005 that were caught on a live microphone and published Friday.

"No, there was no equivalency," Dean said.

"Well, she's taking money from countries that do," said Dean. "What I'm saying is, if I ran a news network, can you have breaking news, fancy music, say, 'Hey the Clinton Foundation is up to this,' but I don't. CNN runs the network. There's breaking news."

"I'm not going down the rabbit hole of the Clinton Foundation," Harlow told Dean, "because CNN has covered that extensively, as you well know."

Dean tried to press the point that Trump's remarks were recorded 11 years ago at a time when he didn't know his microphone was live.

"The voters know that trump can sometimes speak in a way that is vulgar, they knew that a year-and-a-half ago, this is a part of the primary process what I'm saying is happening here," Dean said.

"Here's what's different, right," said Harlow. "It's not just vulgar and it's not just insulting. It's sexually aggressive and predatory. Talking about a position of power to grab a female's genitals. There is a difference."

Dean said that the media -- and CNN in particular -- are focusing unfair attention on Trump while ignoring Clinton scandals.

"What do you think is not being covered about Hillary Clinton?" said Harlow.

The Trump surrogate then began to babble about how everyone has been obsessed with Trump's taxes.

"Why was it 1995 released?" asked Dean. "There was a reason it was 1995. We can get into that later, but Trump's taxes, now this controversy of inappropriate things. We knew that a year ago. The first thing that was asked at the Cleveland debate on August 6th, was, 'Mr. Trump, you say inappropriate things.' The voters understood that, they said 'We don't agree with it. We want a stronger economy, we want to defeat ISIS, so we're taking on an imperfect person. He is very imperfect.'"