Kellyanne Conway scoffs at Trump child rape case: 'Next you're going to ask about his taxes' 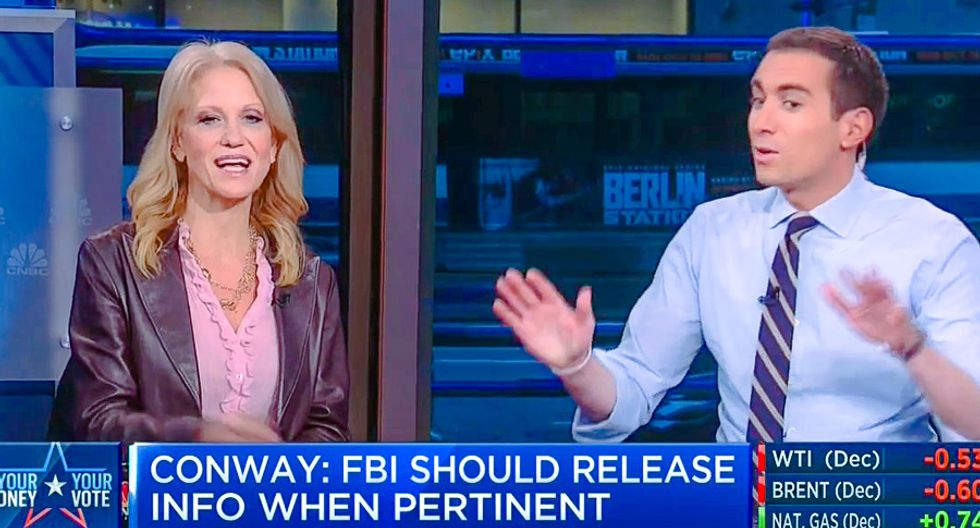 Trump campaign manager Kellyanne Conway declined on Monday to address how a lawsuit accusing Donald Trump of raping a child would impact his presidency.

During an interview on CNBC, Conway accused Hillary Clinton's campaign of being "sneaky" by asking the FBI to release more information about emails that were found on longtime aide Huma Abedin's computer.

According to Conway, Clinton was "encouraging" her supporters to boo FBI Director James Comey.

"It's a very dangerous precedent to have somebody that was secretary of state, first lady, U.S. senator, wants to be president of the United States and be commander-in-chief encouraging people to boo," she opined.

CNBC host Andrew Ross Sorkin pointed out that Trump had vowed to put Clinton in jail if his White House bid is successful.

"And where are we now?" Conway replied. "She is going to be in her second FBI investigation. One FBI investigation, let alone two, do we think this is normal? I think people have been asking the right questions about the wrong candidate. Who's really unqualified? Who's unfit to be president? Who has shown what they would do with their national security information? Who has shown it's always about her and her petty peevish political self?"

Sorkin noted Trump would be facing his own legal problems as president because a woman who accused him of raping her when she was 13 years old was recently granted a December hearing.

"My understanding is that no matter who wins, we're going to be dealing with the email issue after this if she's the president," he explained. "If Donald Trump is the president, he's got the child rape case that's going to happen that was just given a date."

"Oh, come on," Conway gasped. "That you would analogize the two. Give me a break."

"I'm just suggesting that no matter who is in the White House," Sorkin continued before being interrupted.

"Next you are going to ask me where his taxes are," Conway quipped, rolling her eyes.

"That's a whole separate issue, but we're going to have legal cases for each candidate," Sorkin said.

"That's such a ridiculous conflation," Conway remarked. "To just throw the rape word in there when we've got 650,000 emails based on an active investigation of Huma Abedin's pedophilia husband because he's sexting pictures of himself to some 15-year-old girl in North Carolina, I think that's just ridiculous."