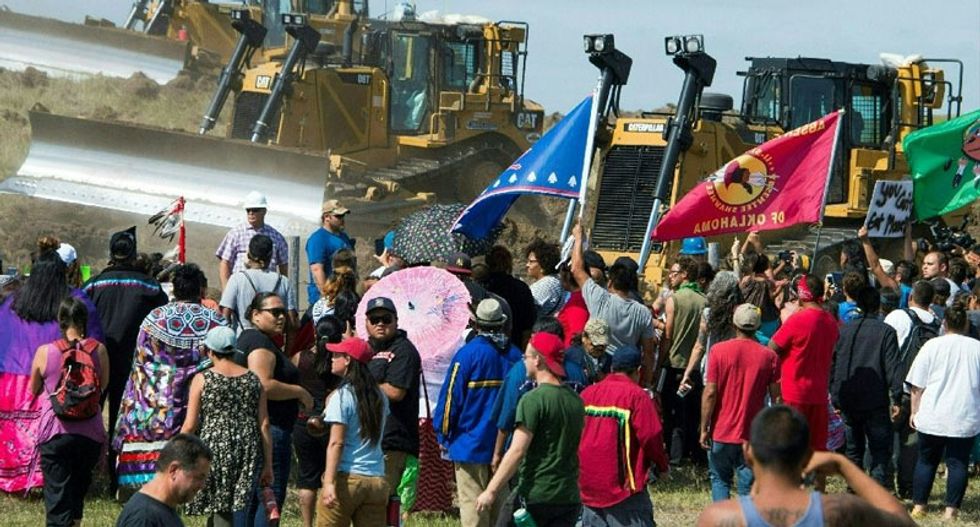 Police in the US state of North Dakota arrested oil-pipeline protesters en masse after a tense standoff and bursts of violence that continued into the night.

Authorities said they had arrested 117 people and confirmed two instances of gunshots in the latest flare of tensions over a controversial oil pipeline project.

One person was shot in the hand after being "run off the road by protesters," said the North Dakota Department of Emergency Services.

Another protester was arrested after firing three shots at police. No injuries were reported.

Law enforcement reported late-night incidents of Molotov cocktails being thrown at officers and fires being set.

The chaos began erupting in late morning when police started moving in to break up protest encampments on public roads and on private land.

Demonstrators moved to block two roads over the weekend and camped on private land in an effort to stop construction of the Dakota Access Pipeline -- the subject of a months-long protest by Native Americans and supporters.

Police in riot helmets used a sound cannon device and pepper spray during operations that initially lasted more than five hours, before authorities said most of the several hundred protesters left voluntarily or were arrested.

"Hopefully, we have persuaded these protesters that our state highways and county highways, private property, is not the place to carry out a peaceful protest," North Dakota Governor Jack Dalrymple said at a news conference.

Dallas Goldtooth, a protester at the scene of the Thursday standoff, said police were "very aggressive" and had also used bean bags and a "concussion grenade."

"The police action today was to remove protectors from this land," he said.

Morton County Sheriff Kyle Kirchmeier could not immediately confirm Goldtooth's account, saying operations were still ongoing. He said protesters were free to exercise their free speech rights "as long as it was done legal and lawful."

The Native American-led protest has grown into a larger movement in the United States, drawing in other tribes, environmentalists and advocates for Native Americans.

The Standing Rock Sioux Tribe, whose reservation is close to the pipeline's route, objects to the project, saying it would endanger the tribe's water supply by crossing the nearby Missouri River, and destroy sacred Native American sites.

The tribe has asked the Obama administration to intervene to stop the pipeline construction and for the Justice Department to oversee local law enforcement.

The federal government has twice asked the pipeline operator to voluntarily pause construction near the tribe's reservation while the authorities reconsider the project's route.

But courts have refused to compel a halt. Energy Transfer Partners, which insists the pipeline complies with the law, resumed construction on October 11.