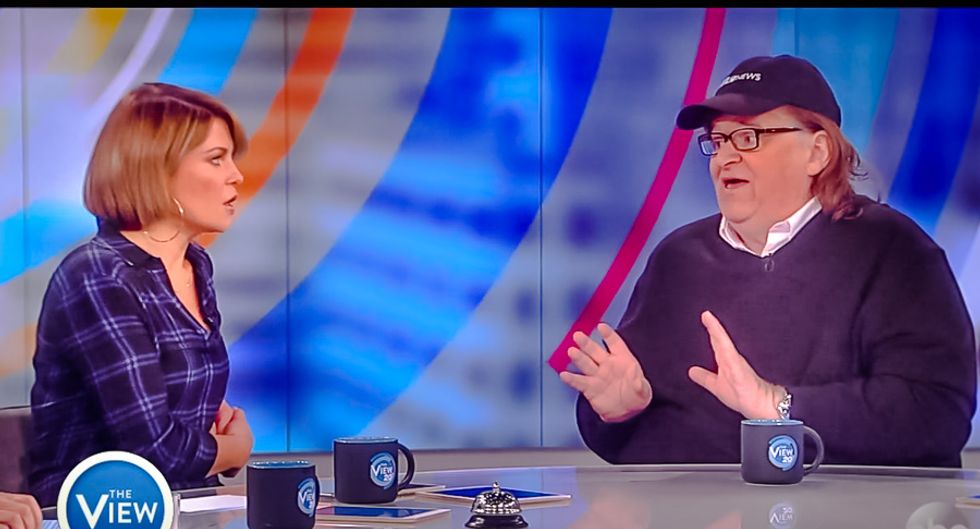 Liberal filmmaker Michael Moore told the hosts of ABC's The View on Monday that Hillary Clinton "lives" her faith instead of making it a part of her campaign.

During an appearance on the daytime talk show, Moore explained that his new movie, Michael Moore in Trumpland, was actually more about Clinton than Donald Trump.

"This is really a film about Hillary and myself as maybe an unlikely messenger," he said. "To say that, even though I've never voted for her -- I didn't vote for in '08, I didn't vote for her in the primary this year. I voted for Bernie [Sanders]. But I'm very excited about voting for her."

"She hasn't devoted her life to harming the planet, hurting people, ruining the lives of employees," Moore noted. "I'm just wondering why, especially people who say they are going to vote for Hillary, they don't say it like they're excited."

The filmmaker acknowledged that he did not agree with Clinton on every point. He noted that she voted for the war in Iraq and that she's "too cozy" with Wall Street.

"But to think of her in the Oval Office representing this country," Moore continued. "I mean, come on... She adopted two-thirds of Bernie's positions."

Moore also noted that Clinton could have devastated Trump during the debates but held back, "and I think that's because, honestly, when she says she's a Christian, I think she means it and I think she lives it."

"The people who talk about it, 'I'm a Christian,' you know, oftentimes aren't," he remarked. "The idea of being a Christian is to just behave that way."

Conservative host Candace Cameron Bure interrupted: "Not all of us!"

"Just because you and I disagree politically doesn't mean I can't respect you," Moore replied, turning to Bure. "I see you as a fellow American. That means we're in the same boat. We're going to sink or swim together."

"But that's what's great about," Moore insisted. "She doesn't talk about it, she lives it. She acts it."

"With some of her positions, I don't believe she lives it," Bure opined. "For those people that really look to the Bible, it's very difficult."