Michelle Obama crushes Trump: 'We want someone who takes this job seriously' 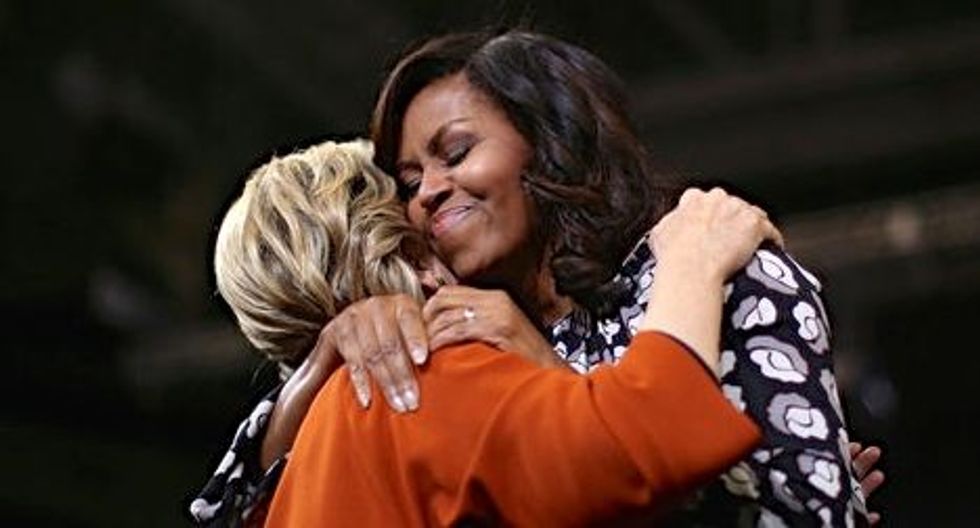 U.S. Democratic presidential candidate Hillary Clinton made her first joint campaign appearance on Thursday with one of her most powerful supporters, first lady Michelle Obama, at a North Carolina rally to urge young people and women to vote.

Clinton, a former first lady who lost the 2008 Democratic nomination to then-U.S. Senator Barack Obama before becoming his secretary of state, praised Michelle Obama for standing up for the rights of girls and women worldwide, drawing a sharp contrast with Republican nominee Donald Trump.

"I wish I didn't have to say this. ... But indeed, dignity and respect for women and girls is also on the ballot in this election," Clinton told a crowd of about 11,000. "And I want to thank our first lady for her eloquent, powerful defense of that basic value."

Michelle Obama's stinging denunciation of Trump after a leaked 2005 video showed him making lewd remarks and bragging about groping women was seen by many as one of the campaign's most striking condemnations of the New York businessman.

Without naming Trump, Obama took him to task again in North Carolina, asking the crowd which candidate they wanted to represent their daughters from the White House.

"We want a president who takes this job seriously, and has the temperament and maturity to do it well. Someone who is steady. Someone who we can trust with the nuclear codes," Obama said.

"I would not be here lying to you: I believe with all of my heart that Hillary Clinton will be that president," she said.

Trump has fallen behind Clinton in opinion polls ahead of the Nov. 8 election amid a series of accusations from women that Trump groped them or kissed them without their consent. Trump has called the allegations "absolutely false."

Although Michelle Obama was critical of Clinton during the hard-fought 2008 Democratic nominating race, any trace of bitterness appeared long behind them. The two women showed an easy rapport. They embraced and smiled. Obama called Clinton "my girl" and made a point of telling the crowd they were tight.

"If people wonder: Yes, Hillary Clinton is my friend," she said.

She also lauded Obama's work for children and military families and in what was perhaps a nod to African-Americans she hopes will vote for her in the state, said Obama had faced challenges she had not as a presidential spouse.

"Let's be real. As our first African-American first lady, she's faced pressures I never did, and she's handled them with pure grace," Clinton said to applause.

Although a sometimes reluctant campaigner, the first lady has thrown herself into the race, and the Clinton campaign has deployed her strategically to increase support among young people and blacks, with whom she is especially popular.

Trump made an appearance in the vital battleground of Ohio, hammering Clinton as corrupt. He said recent emails published by WikiLeaks highlighted how a close Bill Clinton aide helped the couple rake in millions.

"The more emails WikiLeaks releases, the more the lines between the Clinton Foundation, the secretary of state’s office, and the Clintons’ personal finances are blurred," Trump told thousands of supporters who jammed a livestock arena in Springfield.

He cited a 2011 memo from former Bill Clinton aide Doug Band bragging that he had funneled tens of millions of dollars to "Bill Clinton Inc."

"Mr. Band called the arrangement 'unorthodox," Trump said. "The rest of us call it outright corrupt."

Other hacked emails released by WikiLeaks show Chelsea Clinton deeply concerned that Band and other Bill Clinton aides were "hustling" for business that year for their new consultancy firm, Teneo, at the Clinton Global Initiative, the foundation's glitzy event that brings together companies, government officials and non-profit groups.

WikiLeaks has been publishing thousands of emails this month that were stolen from the account of John Podesta, Hillary Clinton’s campaign chairman.