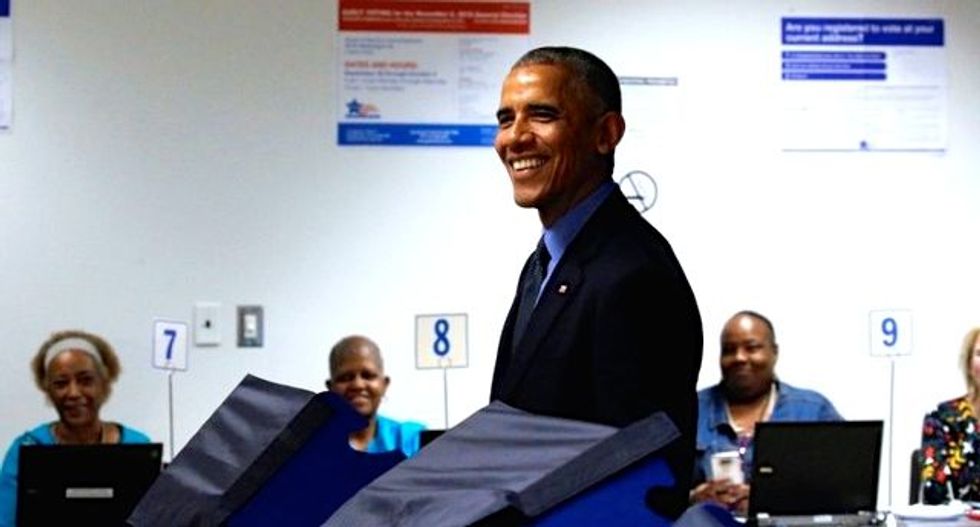 U.S. President Barack Obama looks up and smiles at reporters as he casts his vote for president in early voting at the Cook County Office Building in Chicago, Illinois, U.S. October 7, 2016. REUTERS/Jonathan Ernst

President Barack Obama on Friday cast his ballot for the Nov. 8 election during a trip to his hometown of Chicago.

Onlookers cheered as Obama, who was a U.S. senator from Illinois prior to becoming president, entered the early-voting facility in downtown Chicago.

A smiling Obama shook hands with the poll workers at the site and thanked them for their "outstanding work" before heading to an electronic voting machine.

"Now they can't see me, can they?" Obama asked the workers as he jokingly shielded his machine from reporters standing nearby.

Obama has been campaigning for Democratic nominee Hillary Clinton to succeed him in the Oval Office.

In 2012, Obama was the first president to vote early. At the time he was running for his second term in the White House.

Obama was scheduled to spend the weekend in Chicago. He made the stop at the voting facility in between appearances at two political fundraisers.